Clemens Kappen, founder of Clayton county's oldest furniture store, and one of the oldest businesses in Guttenberg to be located continuously in one building, was born in Zueschen, near Winderberg, Festfuhlan, Germany, August 27, 1825. He came to Cincinnati, Ohio, in 1851, taking 66 days to cross the Atlantic.

Mr. Kappen worked as a cabinet maker with a Cincinnati furniture company for four years, when he became connected with a group being sent to Gutenberg by the Cincinatti Settlement company, and came here with them in 1855.

Immediately after his arrival here he set up a cabinet maker's shop and in 1857 entered a partnership known as Kappen and Bolle. This partnership lasted for several years and was located in a building where the dining room of Hotel Ahlers is now.

On February 25th of that same year Mr. Kappen married Anne Maria Nutt who was born in Balzers, Liechtenstein, Austria. She preceded Mr. Kappen to Guttenberg, coming directly here directly from Austria in 1848. The sailing vessel on which she crossed the ocean took 93 days to make the trip. Many of her companions died from lack of drinking water, as adverse winds blew the ship back out to sea after they had nearly reached America.

The first hearse used by the Kappen undertaking establishment was merely a platform built on running gear, which had brought the Winkle family to Guttenberg from Cincinnati in 1848. About 1864 Mr. Kappen built a very fine looking box on this same running gear, making the first hearse in Clayton county, and one of the first in Iowa. This hearse has made many long trips to distant towns including Waukon and Lancaster. It also served the other communities in the county.

The Kappens always kept an accurate record of funerals and deaths, such records running back as far as 1860. Mr. Kappen is often called upon to refer to them to look up death dates.

All children born in Iowa. The census image clearly shows Babary Nott, but may be a misspelling of Babary Nutt - a possible relative of Mrs. Anne Maria (Nutt) Kappen.

The death date for Anna is an obvious error, but is probably between 1877 and 1880, which would match the time period between the birth date of Maria Martha Kappen on the 1880 census and Anna's absence on the 1880 census.

The photo (below) of the first hearse in Clayton Co., built by Clemens Kappen, Sr. accompanied the news article. Also, click on the link for Albert Kappen's obit. 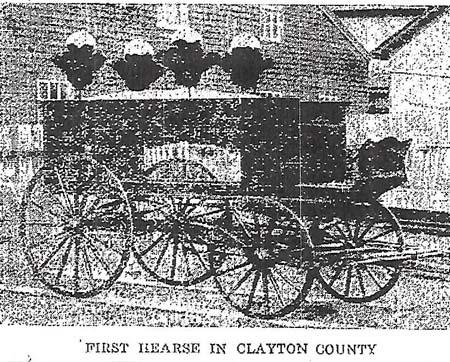