Eliphalet Price, more than a century ago, came to Clayton county and became one of its greatest instruments of progress. He saw the country from the great lakes to the Pacific ocean a barren wilderness, peopled only by the savage and the hunter, and he saw the territory rapidly converted into states and farms and fertile gardens.

Mr. Price was born in New Jersey, Jan. 31, 1811. When he was 34 years old, he, in company with a party of hunters, explored the valley of the Turkey, and being enraptured with its romantic scenery, its rich and fertile prairies and its rippling stream, he determined to make it his future and permanent home. Returning to Dubuque to fulfill a contract he had entered into with Father Mazzuchelli to build for him a Catholic church, he again, in the fall of 1835 returned to the valley of the Turkey. He first lived at Osterdock and then at Millville.

He took an active part in the organization of Clayton county and held the first justice court within its limits. He was the first clerk of the Board of Clayton County Commissioners, was elected the first School Fund Commissioner, and served one term as a Judge of Probate. In 1850 he took the United States census of the counties of Clayton, Fayette, Winneshiek and Allamakee. In 1850, also, he was elected from these counties to the state legislature, and it was at this session that he brought himself into notice as one of the most skillful and sagacious politicians of the state. He took an active part in this legislature, in the organization of the school system of the state.

In 1852 Mr. Price was appointed by President Fillmore as receiver of the land office at Des Moines and held the office during that administration. In 1855 he was elected Judge of the County Court of Clayton county and held the office for two years. During his term in this office he resurveyed the roads of the county, established guide posts and mile posts among them, remodeled the county records and gave names to the streams and townships. When his term expired he had the satisfaction of seeing his county's records and finances on a safe and permanent basis, to become a foundation for those who followed him for all time.

For many years Mr. Price was president of the Old Settlers and Pioneers association of the county, and he organized the first meeting. He wrote and published many stories and poems.

Ill health forced him to take refuge in the Rocky Mountains, and in 1872 he sold his homestead, took the younger members of the family, and departed for Colorado, leaving behind him the scenes of his early triumphs, exploits, associations and hardships, upon which his eyes were never to rest again.

See the 1882 Clayton county history biographies of two of his sons, Realto and Treverious Price. Located on this site.

The 1916 Clayton county history lists many Price biographies (not yet transcribed).

The Clayton county misc. biographies has a shorter bio for Eliphalet Price, and there is a death notice for him on the obit board. 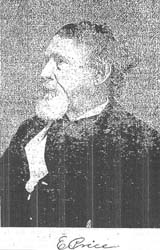