McGregor, Ia.  Special: Every evening now Dr. John Walter, 79, plays his concert for a while, a thing he has been doing with few exceptions ever since he was 12 years old.

It may be a classical piece, it may be a song or waltz of 50 years ago-or it might be a modern selection-all depending on his mood.

Music Museum: He does his practicing in a room in his home which he has turned into a music museum. A large cabinet holds a library of band, orchestra, trio, duet, and solo music that has been accumulated over a period of nearly 70 years and at a cost of several thousand dollars. There are first editions of Sousas marches and rare compositions, once popular but now practically unknown and out of print. Numerous old band instruments are on displayone an 80-year-old shoulder cornet with rotary valves. A table is covered with traps devised and used in a day when few hands in the Middle West had them. The collection includes Swiss bells, anvil, steamboat whistle, and a variety of bird songs. The museum walls are decorated with 50-year-old pictures of the Walter Family Band, posters of Al G. Fields Gold Band, celebrated band of the 90s, with Dr. Walters brother, Will, wielding the baton. There are pictures also of the Ringling Brothers at various stages of their rise to circus fame.

Declined Offer: When the Ringlings first took to the road with a small wagon show, they had the Walter Family Band play for them at Prairie du Chien and other Wisconsin and Iowa towns. The band made a hit and the families were such good friends that Al Ringling asked Peter Walter, Johns father, to take a partnership in the circus. But Father Walter decided his McGregor business held out much better promise for the future and declined with thanks.

Dr. Walter has practiced dentistry in McGregor for 59 years and still goes to his office daily. He was the towns mayor for 20 years, has been president of the Iowa Municipalities League and president of the Northeastern Iowa Dental Association, but it is of the Walter Family Band that he loves best to talk as he nears his 80th birthday.

His father in early days had a furniture factory and paint shop in McGregor-the bedstead that hung out in front for a sign was a landmark. The family lived over the factory. Peter Walter, as soon as his five sons and daughters were old enough, taught each of them to play a band instrument. John, being the oldest, was the first pupil.

When he was 14, he made his first appearance in public, playing a cornet in the McGregor Band as it marched up Main Street in a Fourth of July celebration. Absorbed in his playing and with eyes glued to his music, the boy heard with pride the sidewalk crowds cheering. Then he looked up and saw he had fallen far behind the band and they were cheering for that and not as a tribute to his playing.

Two years later, in 1877, when the youngest daughter, Hannah, was seven, the Walter Family Band emerged full-fledged. In the organization were Father Walter, John, Emma, Anna, Will, and Hannah. They had practiced every evening except Sundays for years and were to continue doing so for 25 years longer.

The band was a sensation at the start, largely because of the three girls. Not only did they play horns-mens instruments-but marched in parades-both unheard of things for the female sex to do in those days. At the Minnesota State Fair in the early 80s, the curious crowds pressed around them so, they had to have police protection. Little Hannah playing a base horn, was the storm center of attention, Dr. Walter recalls.

For a number of years the band played on the Diamond Jo packets on the Mississippi River for the Summer tourist trade. It was an innovation in steamboating on the river and widely advertised. The program was to play at every landing and to blare forth loudly whenever they passed a packet of rival companies that didnt have bands. A band concert was given in the salon in the evening, or they sometimes played for dancing. But there wasnt much dancing on the old packets, says Dr. Walter. Gambling was the sport, Father used to take a hand in it sometimes. He was an expert enchre player, and could hold his own at the gaming tables even with the professional gamblers.

Several season the band played in St. Louis during the Veiled Prophet fiesta.

Floor shows probably are considered quite a modern feature of dance orchestra entertainment, but as long ago as 50 years, the Walter Family Band was doing stunts in concert work. A specialty was their roller skating act, introduced at the height of the roller skating craze. They would take the floor as a band, and play and skate.

We young folks were pretty good skaters-Emma really quite fancy. Dr. Walter said. But father never could learn. He wouldnt give up though, and always insisted on skating with us. He never fell, but he was so awkward and funny, the crowd used to roar. They believed he was clowning. A circus company and a New York vaudeville show both made him flattering offers to put our act on in the East, but again, as with the Ringlings, he voted to stay by McGregor, and keep us just together as the Walter Family Band.

It was after Will had left and become famous and the daughters had married, that nightly rehearsals in the old home ended. The band broke up in 1902.

Photo caption:
A member of the once famous "Walter Family Band," Dr. John Walter, former McGregor mayor, is shown above as he appears today playing his cornet, a practice he has followed nightly with few exceptions since he was 12 years old. Now 79 years old, Dr. Walter lives in a house where formerly stood the harness shop operated by August Ringling, father of the circus men. 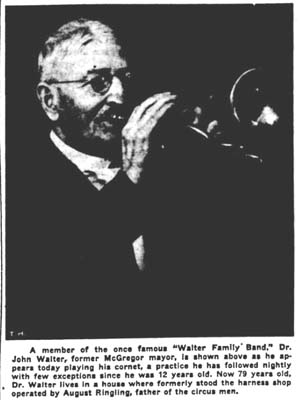