ELISHA AVERY CRARY. This gentleman belongs to the number of honorable industrious men who formerly lived in Grundy County but who have joined the silent majority and rest from their earthly labors. He was born in New London County, Conn., January 29, 1834, and was the son of Elisha A. and Elizabeth [Brewster] Crary. In his death, which occurred at his home in Felix Township, September 16, 1893, the community lost one of its most highly respected citizens.

Peter McCrary, the first of that name to locate in America, found it convenient to drop the "Mc, " which change in the name continues. Our subject on his maternal side is a descendant of a family very prominent in Colonial history, which in fact, however, he did not allow to make him vain, nor did he think that because his forefathers had achieved greatness that there was nothing left for him to do. He acted quite to the contrary, for when quite a small boy he was always found reading some good book when his days work was performed. As his father was a man in moderate circumstances, he did not have the privilege of receiving a collegiate education as he desired, but was permitted to attend the Bacon Academy at Colchester, Conn.

The father of our subject having died March 27, 1855, it fell upon him to provide for the family, which consisted in order of birth and the eldest of four sons. His health failing, however, he decided to come to the western country, and in 1857, made him home with his uncle, Oliver W. Crary, of Clayton County, Iowa. Having secured a school, he followed the vocation of a teacher, reading law during his spare moments, until the outbreak of the Civil War, and on September 14, 1861, offered his services to defend the Flag. Soon after his enrollment, his ability as a leader was recognized, and as a reward of merit he was commissioned Second Lieutenant of Company E, Ninth Iowa Regiment. After serving in that position for a little more than a year, he was appointed Captain of the above company by Samuel J. Kirkwood, then Governor of Iowa, which office he held until the close of hostilities. During his service of over three years he participated in twenty-three general engagements and numerous skirmishes.

On the 19th of December, 1866, Elisha Crary, of this sketch, was married to Miss Catherine Broel. The young couple made their way to Grundy County, where they were residing at the time of his decease. They reared a family of five children, all of whom are living. Mr. Crary was a member of the Masonic order, and was highly esteemed by all who knew him for his consistent and useful life.

Mrs. Crary was the daughter of Lorenz and Mary Broel, the former of whom was born in the year 1789, in Prussia. He was engaged in the battle of Waterloo, where he was captured on the first day of that conflict, and came to America during the 50's, taking up his abode in Clayton County, this state, where he died in the year of 1860. Mrs. Crary was born August 15, 1843, near Cologne, Germany, and in her native country received a good education. As before stated, she became the mother of five children, namely: M. Louisa, Bertha M., Stella M., Lucy J., and Elisha A.

When locating in this county, our subject purchased two hundred and forty acres of land, all of which he placed under cultivation and brought to a fine condition. He was a very hard working man, and was deserving of the respect conferred upon him as one of the most useful members of the community. He began teaching school when eighteen years of age, and while residing in Clayton County, this state, was County Superintendent for a twelvemonth.

E. A. Crary, Jr., was born in a little old log cabin which his father built, the date thereof being September 24, 1867. He received his primary education in the common schools, and was graduated from the State Normal June 8, 1892. It is his intention to become a lawyer, and we bespeak for him a bright and successful future. In September, 1891, he was commissioned by Governor Boies Captain of Company A, of the State Normal School Cadet Battalion. He is a very popular young man, and in the fall of 1893 was elected County Surveyor. He always votes with the Republican party, and is contributing to the general welfare of the community, who hold him in high esteem. 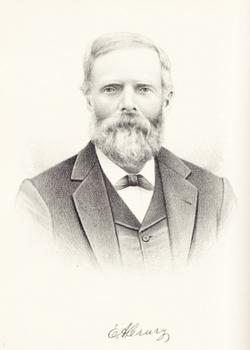