Davidson, Thomas M., the founder of the Elkader Argus, and a man who has a self-acquired education in the law as well as in the ordinary departments of learning, was born in Licking County, Ohio, December 19, 1838. He comes of poor and obscure parentage, of whom but little is known except that they were of Scotch descent. At the age of 3 years Mr. Davidson was adopted by an uncle, with whom he lived until the breaking out of the war in 1861. His school advantages were very limited, never attending more than three months in the year and having had no opportunity whatever after he had reached the age of 18. He came to Iowa in the fall of 1856 and worked on a farm in the vicinity of Volga City. At the commencement of the civil war he enlisted in the Sixteenth United States infantry and was assigned to Company F, First battalion. He participated in the battle of Shiloh and the Corinth and Stone River campaigns. He was promoted to sergeant and in February, 1864, was sent to regimental headquarters at Ft. Ontario, N.Y., where he superintended the drilling and equipping of recruits, remaining there until the expiration of his term of enlistment. He then returned to Clayton County, Iowa, but as his health was too poor to admit of farm work, and having had no opportunity to accumulate capital with which to go into business he learned the shoemaker's trade and supported his family by working at the bench. Being ambitious for better things, he took up the study of law, which he pursued at night, after his day's work, with no assistance other than the encouragement of a true and devoted wife. His election as constable gave him more opportunity and purpose for the study of law. He was admitted to practice in the state courts in 1877. In 1883 he formed a partnership with Hon. Samuel Murdock, of Elkader, which continued for four years, at which time the relation was dissolved and Mr. Davidson continued alone. In 1890, his health growing worse, he gave up the practice altogether and established the Elkader Argus, a republican weekly newspaper. The duties of this enterprise being greater than he could perform alone, at the beginning of 1896, he sold a half interest to Marvin Cook.

Mr. Davidson cast his first ballot for Abraham Lincoln for president and has ever since been identified with the republican party. In 1886 he received the nomination for the office of county attorney of Clayton County, and, although the democratic majority in the county was about 1,200, he was defeated by only 700 votes. He was again nominated for the same office in 1896 and during the campaign took the stump and did much toward swinging the county into the republican column by a majority of over 400 and electing himself and three other republican candidates to their respective offices. He is now serving a second term, being re-elected in 1898. He is a member of the I.O.G.T., I.O.O.F., A.F. and A.M., K, and P., and G.A.R., in all of which he has held important offices.

While yet a soldier he was married to Miss Margaret E. Wickham, of Licking County, Ohio. They have reared two children, one of whom, M. Anna, is the wife of Rev. R.C. Lusk, pastor of the Methodist church at Elma, and the other, Wilmer W., is foreman in the Argus office. He is reading law also, with a view of some day following the profession of his father. At this writing the health of Mr. Davidson has so far improved that he is again in practice in connection with his newspaper work. 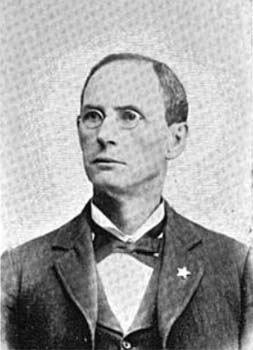