Dr. H.H. Clark of McGregor, died at his home January 18, 1925. He was born on October 12, 1842. His family moved to Illinois when he was eight years old, taking up a farm near Freeport. When he was eighteen years old he enlisted in the 92nd Illinois Mounted Infantry and served four years. After the war, he entered Rock River Seminary and after completing his course there he studied medicine and graduated from the Chicago Medical College (Northwestern) in 1869. He served as an intern at Mercy Hospital and in 1870 located at McGregor. Dr. Clark was an energetic worker and early engaged in active civic and professional matters. His interest in health activities
led to his appointment as a member of the first State Board of Health, passed by the Iowa legislature on the 26th day of March, 1880, and approved by the governor on the 23rd day of April, 1880. Dr. Clark served on the board thirteen years.

Dr. Clark in his oration on Surgery at the 1916 session of the Iowa State Medical Society, entitled, "Then and Now", presented some of his early experiences in McGregor. He writes:

"In the year 1870, armed with a diploma from the Chicago Medical College (now Northwestern University College of Medicine) and the experi-
ences as an intern at Mercy Hospital I bade adieu to Chicago and turned my face westward. At Dubuque I heard of the growing importance of the up-river town, McGregor, and on a Sunday morning in April, straddled by little bay horse, my only worldly possession of value, saving a few books and instruments, set forth across country to look over the chances the new town had to offer a bright and aspiring physician. I
rode into McGregor just as the church bells were ringing for evening service. That was forty-six years ago (55 years). I have been there since with the exception of a couple of days now and then to attend a medical meeting or similar form of recreation.

At the time I came, McGregor was a hustling little city of 4000 population. there were nine doctors in the town, but a clinical thermometer was unknown. Dr. Frederick Andros was the only one who could boast of a hyperdermic syringe. Dr. Andros had been the first member of our profession to penetrate the wilderness that, in 1837, the year he came to northeastern Iowa, lay north of Dubuque. He built the first house in Garnavillo, the county seat of Clayton county, which at the time comprised all the territory from Turkey River north to the Canadian border, and west to the Rocky Mountains. After years of practice at the county seat and some service for the Indians at the Yellow River and Fort Atkinson missions, the Doctor finally located at
McGregor. There he soon became recognized as the surgeon not only for the town, but the surrounding country for miles, he was the only man thought of when a surgeon was required.

A few days after my arrival, I called on the Doctor, then nearly seventy years old, and presented my credentials. He gave me the glad hand and we became firm friends. Some months before, he had met with an accident which had seriously impaired the strength and usefullness of his right hand, my association with him was therefore fortunate, for, while he was the surgeon and received the credit if any were due and emoluments, if any such were forthcoming, I did the work and gained the experience. Our association continued in this manner for about ten years, when the Doctor decided Iowa was getting too civilized and tame, and went West to grow up with the country. He was then eighty years old. After practicing in Dakota for ten years, he changed his residence to Minneapolis, where he died at the age of ninety-one years. Dr. Andros was far superior in intelligence and ability to the average physician of his day, but
he was a typical frontiersman and something of a character. I remember a country drive I took a short time after I came to McGregor. He drove a good horse but he interfered so badly that either his right or his left hind leg seemed to be in the air all the time. As we were jolting over a rough road back in the Mississippi hills, the Doctor suddenly stopped his horse and remarked, 'There's the damndest nicest spring over there you ever saw'. We got out and walked over to where a fine stream of water gushed from the rocks and formed a pool about three feet in diameter and eighteen inches deep. The Doctor
took off his high silk hat which he always wore and in which he carried his letters, red bandanna, cigars, stethoscope and always either a clean or dirty collar, pulled off his coat, rolled his sleeve to his elbow and thrust his hand to the bottom of the spring. After lifting aside a few stones he pulled out a flask of whiskey. He uncorked it, took a generous drink and then returned the bottle to the bottom of the spring for future use.

If there is any particular reason why during my work of forty-six (55) in McGregor I have done more or less surgery, it is in all probablility due -- no, not to Dr. Andros' bottle in the spring, but the fact that he was growing old,
had a crippled hand and was my friend. The truth is that inasmuch as no one in my locality until very recent years gave anything like especial attention to surgery, the field was largely mine and so, while I claim no expert knowledge and have never posed as a surgeon, I have taken care of a large number of surgical cases and have sometimes been called a surgeon. I need not tell you that such is not now the case and later on may give you a hint as to the why and wherefore."

Dr. Clark has set forth his association with Dr. Andros, an interesting chapter in the lives of the two notable men who early engaged in the practice of medicine in northeastern Iowa. In his fifty-four years of practice in McGregor, Dr. Clark was witness to an evolution in the practice of medicine and surgery in its several stages. In the early years surgery was limited to the surgery of emergencies, but the time was not far off when the field was to be greatly extended, and while Dr. Clark has his surgical ideas developed in the "old days", they were not fixed beyond the possibilities of change, and as surgeons entered new fields, he also took his part in the new surgery. To do this more effectually, he provided himself with the necessary facilities and first of all was a
hospital, and, assisted by his daughter, Dr. Alice Clark Brooks, a creditable hospital was organized.

Dr. Clark was a surgeon to the C.M.& St.P. Ry.Co. for fifty years, and when the C.M.&St.P. system surgical association was formed, he became an active member. The writer recalls numerous occasions when Dr. Clark, participated in the discussion of problems which were of particular interest to railway surgeons; he was always quite positive in his views, which he did not hesitate to express.

In 1871 Dr. Clark and Miss Judith Baugh, daughter of Judge Downing Baugh, were married, and to them six children were born, four of whom, with Mrs. Clark, survive him.

-----
source: "History of Medicine in Iowa", D.S. Fairchild, M.D., F.A.C.S., reprinted from
The Journal of the Iowa State Medical Society.

-submitters notes:
This book has no date, I believe it was written between 1925 and 1930, but many of the 'Journal' articles in the book date much earlier.

*See also, the Henry H. Clark bio. (this board) from the 1894 Dubuque, Jones and Clayton Co., IA History

*See also, the biography of Dr. Frederick Andros on this biography board. 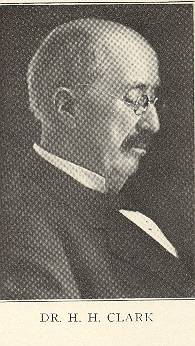