JOHN S. WOOLSTENCROFT (1868), editor and publisher of the 'Jackson County Times' of Heron Lake, is a pioneer of southwestern Minnesota and one of the best known residents of Jackson county.

He is a native of Clayton county, Iowa, and was born December 23, 1848, the son of Benjamin and Mary Ann (Keer) Woolstencroft. The father of our subject was a soldier of the regular army, being a sergeant of company K, First U. S. infantry, and participated in the Blackhawk war, Florida war, Mexican war and the war of the rebellion. John was raised on a farm in his native county in Iowa.

In the spring of 1864, although he was then only a little past fifteen years of age, he enlisted as a union soldier, becoming a member of company L, of the Sixth Iowa cavalry. With his regiment he took part in the memorable campaign against the Sioux Indians in 1864, engaging in two pitched battles with the Indians in the Bad Lands. In 1865 he started again with the forces against the Sioux, but owing to sickness was left in hospital at Fort Rice. While there he was in three engagements with the hostile Indians. Mr. Woolsteneroft was mustered out with his regiment at Sioux City, Iowa, in the latter part of October, 1865, and the regiment was disbanded at Davenport.

After his discharge from the army Mr. Woolstencroft returned to his home and engaged in farming. He arrived in Jackson county on the 20th day of May, 1868, and located in the Graham Lakes country in Nobles county, when there were only five or six families in the whole county. He resided in that frontier settlement until June 10, 1869, and then returned to his old home, where he was married. He came north again in 1872 and took a homestead claim on section 34, Belfast township, Murray county, and upon that claim he lived until March 22, 1881.

On the date last mentioned Mr. Woolstencroft located in Heron Lake, where he went to superintend the large farming interests of J. T. Smith. On the 17th day of November of that year he was caught and wounded in some shafting and so severely injured that he was incapacitated for physical labor.

In May, 1882, he engaged in the saloon business in Heron Lake and was so engaged until 1888. Mr. Woolsteneroft then engaged in the hotel business and in 1801 built the Wavertree hotel, which he conducted seventeen years. In partnership with C. W. Schultz he founded the 'Jackson County Times' in 1895 and in July of the next year he took exclusive charge of the management and editorial department. He has ever since been the editor and publisher. 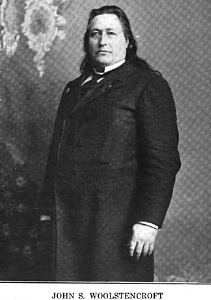