C.M. Forbes
The life of this gentleman, one of the most prominent and influential business men of Oregon, conveys, as few lives do, the lesson that to an American citizen endowed with honesty, ability, and energy, all things are possible. During the thirteen years he has been a resident of this State he has advanced steadily from comparative obscurity until he has attained a position among the foremost business men of the State, and the story of his career is not only illustrative of the possibilities of the "sunset land of the Pacific," but is a deserved tribute to his worth and character.

He was born April 10th, 1848, in the little town of Garnavillo, Clayton County, Ia. His education was that of the common schools of his native State, supplemented with a course at the St. Louis Commercial College.

Mr. Forbes came to the Pacific coast in March of 1875. While in Stockton, Cal., he obtained employment with the Howe Sewing Machine Company. He remained with this company four years, when at the expiration of that time he was offered the position of general manager of the entire Washington and Oregon trade; this he accepted, and soon changed his residence to Portland, Ore., to assume his new duties. He continued with the company two years, when the opportunity presented itself to go into business for himself, which, yielding to a long-felt desire to be his own master, he took advantage of. He sent in his resignation to his former employer, which was reluctantly accepted, and entered into partnership with ex-Mayor E. C. Wheeler, of East Portland, going into the furniture business. Though their stock was limited and capital small, their credit was good, their friends were legion, and the business grew rapidly! The firm of Forbes & Wheeler continued until the sad death of Mr. Wheeler, which occurred in June, 1889. After this Mr. Forbes continued the business himself for a while, and then formed a partnership with Mr. H. C. Breeden, a gentleman of business ability and good commercial standing. Under the firm name of Forbes & Breeden these gentlemen now do a business second to none on the coast; year by year their trade has increased, their enterprise and integrity noted, appreciated, and rewarded, and today the furniture house of Forbes & Breeden claim a foremost place in the business community of Portland.

Mr. Forbes well deserves the success which has been his; he is an untiring worker, and gives his closest attention to every detail of his extensive business. Personally he is genial, affable, and popular; he has hosts of friends both in the business and social community; he is a man of sterling worth, of unsullied integrity, and one who deservedly holds the confidence of his fellow-men. His business has been built up wholly by honorable dealing, by hard and persistent work, and the exercise of excellent business sagacity.

Mr. Forbes has given little time to politics; he is, however, a stanch Republican, and in June, 1890, was nominated and elected, without opposition, Councilman for the Second Ward, an office which he had held for the two preceding terms. He has been for some time President of the City Council, and in all matters pertaining to the city's welfare he has taken an active interest; he is also a useful member of the Chamber of Commerce, and is always ready to lend a helping hand toward any movement which tends to the development of Portland. Possessed of quick perception, strong in his convictions of right and wrong, and honest in purpose, together with being a devoted and true friend in sunshine and storm, he numbers among his friends many of the prominent men of the State. He is modest and unostentatious in manner, and one whom prosperity has not changed. He has been a hard worker all his life, and has fairly earned the success which has come to him. He is progressive and public-spirited, and begrudges no effort that may contribute to the public good. 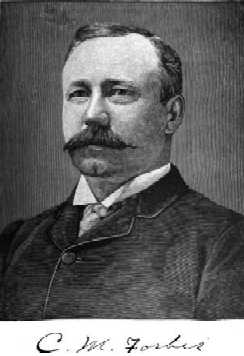