Leibrock's store has been operated by the members of one family in the same building longer than any other business in town.

Charles Leibrock, a pioneer, was born in Vogelsbock, 'Rhenish' Bavaria, Germany, May 1, 1833. His father died when he was six years old and his mother when he was 16, leaving him in his youthful days the support and care of the family. In 1853 he left his native land to seek the opportunities and freedom that America offered. The journey across the Atlantic was a most perilous one, lasting 90 days instead of 30, arriving in New Orleans badly in need of food and supplies.

From there he came by boat to East St. Louis and worked for a short time on a farm, then came direct to Elkader where he lived until the time of his death. He engaged in work in the mill and remained there until 1868, first as laborer and later as purchasing agent. In 1870 he engaged in the mercantile business in the building located between Frieck's meat market and Sam's bakery. He continued in business until 1899 when he sold out and retired. Soon after he suffered a slight paralytic stroke when was followed by various other complications, and passed away two years later at the age of 68 years.

Miss Elizabeth Leibrock, a daughter, now became owner of the building and it was rented to outsiders for a few years until her death when it was purchased by Mr. and Mrs. F.J. Leibrock. At this time the entire building was remodeled, the second story made into a modern and convenient apartment. The first flor was prepared for the Ladies Ready to Wear stock which Mrs. Leibrock has conducted since she was 18 years old.

Frank G. Leibrock, the son of Charles and Elizabeth (Christ) Leibrock was, like his father, a veteran merchant, having assisted in his father's general store in his youth. He was born in Elkader Jan. 19, 1860, and passed away Aug 10, 1929. Several years before his death he and his wife realized that they must take life easier and made several long and interesting trips, spending the winters in California and Florida.

After the death of Frank Leibrock his wife disposed of the business, passing it on to her daughter Mrs. G.F. Katschkowsky. Mrs. Leibrock lacked but seven months of being in the same business in Elkader for 50 years and is deserving of the rest and comfort she now enjoys.

During the long career as citizens and merchants in our town the Leibrocks were ready to help with public progress. They maintained a standard for quality merchandise, and always stood back of the goods leaving the store. This same policy is being carried on in the same location, Leibrock's store by the daughter, Mrs. G.F. Katschkowsky, who is now the proprietor.

A business building in Elkader that has been in one family name for 80 years was sold last week. And when W.E. Sauer, the purchaser, took possession he changed the ownership of a property that has been in the Leibrock family name since Sept. 6, 1870, passing through three generations of the family. For 55 years of that period the building was used for a merchandise business location. Situated on Main street, the structure was erected in 1866 and its history dates back almost to the beginning of the history of Elkader, because the lot on which it stands was part of the original plat of ground on which the town of Elkader was built.

The land was originally owned by John Thompson, who emigrated to Clayton county in 1844 from Kentucky. In 1845 he came to the site of Elkader and built the Elkader mill. He entered the lands on which the town now stands from the United States government, and platted the town of Elkader in 1846. The history of the property reveals that R.C. Place and Lucius H. Place, brothers who were merchants in New York state, bought the lot in 1865 and erected the building in 1866. They started a general merchandise store and operated it as a partnership until 1869, when L.H. Place became interested in Clayton county politics and was elected sheriff of Clayton county. He disposed of his interest in the business in 1870 to his brother and that same year Charles Leibrock purchased one-third interest from him.

Clayton county history discloses that Leibrock was born in Bavaria, Germany in 1833 and was educated there. When he was 20 he emigrated to America, coming to Elkader in 1854, where he became associated with John Thompson in the operation of the Elkader mill, as its purchasing agent. Because of that association and the experience he bacame interested in merchandising the entered actively into it with the purchase of the interest in the "Place Store."

In 1871, Max Mentzel and J.C. Vaupel, two enterprising young men, who had come to America from Germany about the same time Leibrock had come here and located in the county, purchased the remaining interest from R.C. Place and the enterprise became known as "The Leibrock, Mentzel and Vaupel General Store."

One of the older residents of Elkader, "Grandma" Dittmer, who is 88 years old, has a very vivid memory of the store. She lived on a farm in Cox Creek township, eight miles south of Elkader, and she tells about coming to Elkader with her parents to "trade", which was always done on a large scale because they didn't come too often.

The store dealt in everything - dry-goods, clothing, groceries, shoes, hardware - in fact, everything that a rural trade would want to buy. The three men were gracious to their customers, and the store was popular. A trip to town in those days would involve many hours in the town, and the store served as a meeting place for many of the rural folk, who did their trading and visiting at the same time. Grandma Dittmer relates. They were always made very welcome and never felt at any time they were staying "too long."

Mentzel's health began to fail a couple of years after the partnership was formed and he sold his part in the property to Vaupel for $900. In the fall of 1874, Vaupel went to Chicago to do some purchasing for the store. Whether he met with "foul" play, or what happened, no one ever knew, but he was never heard of again.

In the meantime, F.G. Leibrock, eldest son of Charles Leibrock, together with his wife, Louise, who had been operating a millinery store in the town since 1880, started "Leibrock's Ladies Ready-to-Wear Store" when they were married in 1881. It was located in a section of the building where the Ben Franklin store is now located.

In 1923 F.G. Leibrock purchased the building from the heirs of Charles Leibrock and moved his business into it. During the time from 1898 to 1923, the building had been used by Poull and Bink for their general merchandise store until 1908, and then Regan and Witt had operated their furniture and undertaking business from 1908 to 1923.

F.G. Leibrock died Aug 10, 1929, and Louise Leibrock continued the operation of the store until 1930, disposing of the business to her daughter, Mrs. Ruby Katschkowsky, who operated it under the name "Leibrock's Store" until her death Dec 2, 1943.

The building then sold to Mrs. Phyllis Petterson, who now owns the business and operates it as "Phyllis' Ship" in the same location. Thus the "Leibrock" name became Elkader business history, after that portion of it served the Elkader community for over 63 years.

Louise Leibrock died May 2, 1949, at the age of 89, after having lived in Elkader for 76 years, having come here when she was 13 years of age. She was associated with the business life of the town for 69 years. The heirs of her estate decided to sell the building because they no longer cared to assume the responsibility for its care and upkeep. It is a well preserved building. 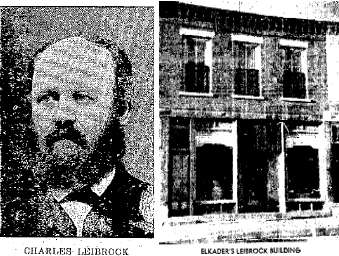