Walter D. Tracy is a farmer and dairyman residing twenty miles west from Lakeview, Oregon, on one of the most valuable tracts of land in that locality. He has in all five hundred and sixty acres of land, about one-half of which is natural meadow and under irrigation, producing and abundance of feed for his large herd of dairy stock. All of this land is well improved and under fence.

Mr. Tracy is a native of Clayton county, Iowa, born November 21, 1864, the son of John S. and Malissa (Baker) Tracy, the former a native of Illinois and the later of New York. John S Tracy was an early pioneer of Clayton county, Iowa, and came to California in 1876, settling in Shasta county, where he still lives at the age of sixty-four years. His father, James Tracy, came from Ireland to Illinois and died in Iowa at about the age of eighty years. The mother of Walter D. Tracy removed in early life with her parents to Iowa, where she was married. She came west with her husband and died in Shasta county, California twenty-two years ago.

The brothers and sisters of Mr Tracy are Charles C., Mrs Clara Tooney, John Q, and Ernest F., all residents of Sacramento California.

Mr. Tracy came west with his parents and grew to manhood on a farm. In the spring of 1884 he came to Silver Lake, Oregon where he obtained work for a short time, after which he took a homestead and preemption in Drew's valley and engaged in improving his land and raising stock. This land he sold in 1897, when he purchased his present farm.

On November 17, 1886, Mr Tracy was married to Miss Nannie Barker, a native of Shasta county, which union has been blessed with five children, Lawrence E, Joe E, Agnes E. Douglas O., and Roy A.

Mrs Tracy was a daughter of George and Mary Barker , who came via Panama to Shasta county in very early days. Her grandparents were about the first who crossed the plains with an ox team and settled in Shasta county, where both they and Mrs. Tracy's parents since have died.

In fraternity life Walter D. Tracy is associated with the Woodmen of the World and is a member of Lakeview lodge, No 63 I.O.O.F. Both he and Mrs Tracy are members of the Rebekah degree of Oddfellowship and Mrs Tracy belongs to the Woman of Woodcraft.

Mr. Tracy deserves great credit for his present high standing among his social and business associates, as he started in life in his present locality with hardly a dollar to his name. He is a man of pluck and energy, honor and integrity, qualities which have won him a place in the confidence and esteem of a wide circle of friends. 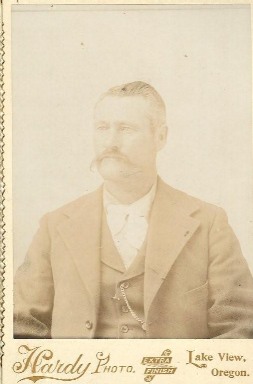