Morris M. Mellen is a resident farmer of Honey Creek township, living on section 4. His present home was also his birth place and his natal day was November 20, 1857. His parents, Herman H. and Jane (Freeman) Mellen, were natives of New York and Ohio respectively and were married in the latter state in 1847. They became the parents of four sons, but all have passed away with the exception of Morris M. Mellen. The father died June 13, 1900, but the mother still survives and makes her home with her son. The parents came to Iowa, locating in Clayton county, in 1851. The father preempted a quarter section of land in Honey Creek township, Delaware county, in May, 1852, since which time this property has been continuously in possession of the family. He carried on general farming and stock-raising and carefully developed his fields, making his farm one of the valuable properties of the district. He was interested in public affairs as a supporter of the republican party but was never an office seeker. Mrs. Mellen, who was born May 5, 1827, is now eighty-seven years of age. Morris M. Mellen acquired his education in the public schools near his home and at the age of twenty years started out independently in life. He has always followed farming and today has one of the finest homes in the rural districts of Delaware county, owning two hundred and thirty acres of rich and productive land, all of which he has brought under a high state of cultivation. His place is known as Oakdale and is lacking in none of the accessories and equipments of the model farm of the twentieth century, being indeed a valuable property.

On the 18th of September, 1881, Mr. Mellen was united in marriage to Miss Belle Lash, who was born in Iowa, March 14, 1863, a daughter of John and Henrietta (Belt) Lash, who came from Monticello, Jones county, Iowa, to Delaware county in 1870, settling in Honey Creek township. The father, who was born September 22, 1828, died on the 21st of February, 1907, and the mother, whose birth occurred August 9, 1829, was seventy-one years of age when she passed away on the 19th of December, 1900. The remains of both were laid to rest in a cemetery at Edgewood. Mr. Lash engaged in teaching when a young man, and meanwhile studied for the ministry, passed the required examination, and was ordained in the United Brethren church, after which he preached for many years. After coming to Delaware county he engaged in farming and continued to preach. Some of his best sermons were studied out while following the plow. He was a good Christian man. His children were three in number, namely: Winfield, Samantha and Belle. To Mr. and Mrs. Mellen have been born two children: Audra, whose birth occurred on the 13th of August, 1882; and Fred, whose natal day was August 1, 1883. Both are still under the parental roof.

The Mellen family is widely and favorably known in Honey Creek township and in various other sections of the county. The farm which has been in possession of the family for so many years is now operated by Morris M. Mellen and his son and is one of the fine properties of Honey Creek township. A spirit of progress characterizes him in all that he undertakes and is manifest as well in his public connections. He votes with the republican party and is interested in matters relating to the general welfare and upbuilding of the county. A lifelong resident here, his history is familiar to his fellow townsmen and his worth is widely known. 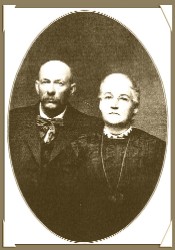