Froelich, rural community west of McGregor, got its name from one of its early citizens, Henry Froelich, who was the father of John Froelich, inventor of the first tractor.

The story of the beginning of the first tractor dates to the late 80's. John Froelich, who ran a feed mill and elevator in Froelich, would go to Langford, S.D., during harvest season to thresh. He operated a straw buring steam threshing outfit and took his own threshing crew with him from Froelich.

In studying the problems of hazard from fire in buring straw in the high Dakota winds and the scacity of water and its corroding alkaline nature, the idea of a gasoline-powered outfit came to Froelich.

Only stationary gas engines had been manufactured up to that time and very few of them. Froelich, for his purpose needed one to move itself and pull a load, the same as the steam threshing machine did.

He went to Cincinnati, Ohio, and bought a stationary engine which he set up in his shop at Froelich with the help of Will Mann of Langford, S.D.

After months of effort with the help of Mann, a skilled mechanic, he assembled a tractor that would move forward under its own power. More work was needed to perfect it so it would move backward. This was accomplished and it was tried out on a neighbor's farm.

The outfit was taken to South Dakota in August 1892 and it operated successfully for 52 days. The new tractor aroused the interest of a group of Waterloo business men and in January 1893, the Waterloo Gasoline Traction Co. was organized with John Froelich as a large stockholder and director. The tractor was placed on the market under the name "Waterloo boy." In 1918 after Mr. Froelich was no longer associated with the company the John Deere Co. bought out the Waterloo concern.

Froelich realized little financially out of his venture and received scant recognition during his lifetime. He died in 1933 at St. Paul. On August 27, 1933, a stone monument in his honor was unveiled in Froelich's honor in the little community that bears his name. There were 2500 persons attending the ceremony, includiing Will Mann, the man who aided him in the invention, and Will Klotzbach, who also helped, H.J. Klotzbach, Ed. Hupfer and Chris Ihde, members of his threshing crew.

John Froelich (1849  1933) was an inventor who lived in the U.S. state of Iowa, and invented the first practical gasoline powered farm tractor.

John Froelich was the son of Henry Froelich and Kathryn Gutheil, German immigrants to the United States who arrived in Clayton County, Iowa in 1847. John was born in 1849, and grew up to be a farmer near the small village of Froelich, Iowa, named for John's father. John Froelich's love of machines led him to operate a grain elevator and own a steam powered wheat threshing operation.

Froelich first conceived of a gasoline powered tractor in 1890, after purchasing a Van Duzen gasoline engine to power his grain elevator. Froelich noticed that farmers in South Dakota, where he often went in the fall to thresh wheat, had trouble finding coal or wood to fuel their steam engines. Working together with blacksmith William Mann in Mann's shop in Froelich, Iowa, Froelich mounted the gasoline engine on wooden beams over a running gear from a Robinson traction engine. Using several new parts designed by Mann and himself, Froelich was able to build a 16 horsepower (12 kW) tractor that could go both forward and backward by the year 1892. After completing the tractor, Froelich and Mann brought it to Langford, South Dakota, where they would connect it to a J.I. Case threshing machine, and thresh 72,000 bushels of grain in 52 days.

After returning from his successful run in South Dakota, Froelich met with some businessmen in Waterloo, Iowa, where they formed the Waterloo Gasoline Traction Engine Company to produce Froelich's tractor for sale. Only 2 tractors were sold, and both were later returned by unsatisfied customers. The company switched to making stationary engines in order to provide revenue. Froelich left the company in 1895, and eventually moved to St. Paul, Minnesota with his wife Kathryn Bickel, and their four children. Froelich's tractor was eventually revived and improved by the Waterloo Gasoline Traction Engine Company, which began building tractors again in 1911. The company was purchased by Deere & Company in 1918, and became the John Deere Tractor Company. Froelich, who received little money or recognition for his invention, died in 1933, in St. Paul. He was inducted to the Iowa Inventors Hall of Fame in 1991.

~copied from From Wikipedia, the free encyclopedia -
http://en.wikipedia.org/wiki/John_Froelich

-source of photo: the photo appears on many websites, and is in the public domain; credit given to the Clayton County (Iowa) Historical Society for making the original available 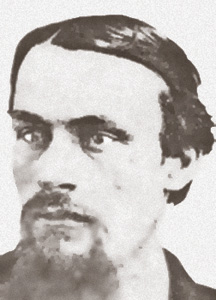