Dr. Hugh Livingston, a physician and surgeon of Hopkinton, has resided in Delaware county for many years and although he is quiet and unassuming in manner his genuine worth has been demonstrated many times and he is highly respected and esteemed by his fellow citizens. He has a representative practice which yields him a good annual income and he holds the respect and confidence of the general public and the profession alike.

Dr. Livingston was born October 5, 1846, on the Livingston homestead, located a mile and a half from Hopkinton, a son of Hugh and Isabelle Livingston. As a young man the father went with a colony to the Selkirk settlement in Canada and there in 1830 married Miss Isabelle Rose, a daughter of Alexander and Lily (Campbell) Rose. To Mr. and Mrs. Livingston were born nine children, six daughters and three sons, namely, Anna, Duncan, Lily, Isabelle, Mary, Nathaniel, Hugh, Margaret and Rachel. The Doctor is the only one now living. The three oldest, Anna, Duncan and Lily, were born in the Selkirk settlement, Isabelle in Dubuque, Iowa, and the others on the family homestead in this county. Duncan Livingston became second lieutenant in Company K, Twenty-first Iowa Volunteer Infantry, and did gallant service throughout the Civil war.

When Mr. and Mrs. Hugh Livingston, Sr., came to Iowa from Canada in 1835 the party with which they were traveling sought shelter at Fort Snelling, Minnesota. Their goods were hauled to that place on ox carts with wooden wheels made from round blocks of oak without any iron mounting. At Fort Snelling Hugh Livingston, who was a carpenter by trade, superintended the building of boats in which the women and children rowed down the Mississippi, the men following on land with the carts And driving the stock. In this manner the party succeeded in reaching Dubuque, which at that time was only a trading post, but they remained there for some time, in the meantime prospecting the land farther west. They finally concluded to settle near the Maquoketa river and the Livingston family came to this county in 1837, being among the earliest pioneers, as they took up the second claim in the county.

Dr. Livingston worked upon his father's farm as a boy and when not so employed attended the district schools. He supplemented the education thus acquired by three years' work in Lenox College. When he became of age he went west, crossing the plains to the mountains of Colorado, and was for a year and a half employed in the quartermaster's department at Fort Sedgewick, that state, and for a similar period of time was foreman of a construction gang working on the Union Pacific Railway, which was then being built. He subsequently returned to this county and assisted his mother in the management of the homestead for a few years, after which, in 1874, he came to Hopkinton, and purchased a drug store. He continued to conduct this until 1887 and at the same time studied medicine privately. As a competitor had opened another drug store in the town he closed his place of business, went to Chicago and matriculated at Rush Medical College. He was graduated from that institution in 1890 and in addition to his degree received special diplomas in diseases of the eye and ear and clinical gynecology as he had taken extra courses in those subjects. Thus prepared for the practice of the profession which had always most attracted him, he returned to Hopkinton and established himself as a physician and surgeon. He also reopened his drug store and is still conducting that as well as attending to his practice. He has made a thorough study of the science of medicine and keeps abreast of the latest developments in that field as he desires to give his patients the benefit of any new discoveries that aid in the battle against disease. He is very careful in making a diagnosis to take into consideration all symptoms as well as the medical history of the patient and watches carefully all developments of the case and is, therefore, usually able to effect a cure, or, if that is impossible, to hold the disease in check.

On the 10th of December, 1901, at New Hartford, Iowa, Dr. Livingston was married to Miss Hattie Steward, a daughter of James C. and Mary C. (Stroud) Steward. She was born November 14, 1877, at the farm home near Strawberry Point, Iowa. Her father's people were principally of Scotch and Welsh blood and her mother's grandparents came from England. Her father was born at Marietta, Ohio, and her mother at Erie. Pennsylvania, but were both reared in Wisconsin. There they met and married and five of their children were born there. In 1875 they came from Sauk county, Wisconsin, to Strawberry Point, Clayton county, Iowa. Eight children were born to them as follows: Orin, who died in 1887 at the age of twenty eight years; Estha, who died in 1876 at the age of sixteen; George, who owns and operates a farm within sight of the old homestead near Strawberry Point; Flora, the wife of Fred Tracy, who owns land near the Steward homestead; Mary, the wife of William Tracy, who is a brother of the Mr. Tracy previously mentioned and resides upon a farm located east of Strawberry Point; Lawrence, who is engaged in farming near Belvidere, Illinois; Mrs. Livingston; and Myrtle, who died in 1883 at the age of three months. In 1888, the father's health failing, the family moved to Strawberry Point and Mr. Steward passed away there March 1, 1908, at the age of seventy years. The mother was bright and active for her years and met death by accident September 27, 1912, when she was just a few months less than seventy-three years of age.

Mrs. Hattie (Steward) Livingston is a graduate from the Strawberry Point high school. She has taken some college work and is a graduate nurse, holding a diploma as a registered nurse from the Iowa state board. After leaving high school she taught school near Strawberry Point for a year and followed nursing for some time before her marriage. She has become the mother of two daughters: Huberta Mary, born August 1, 1905; and Harriet Mabel, born October 25, 1910. Mrs. Livingston has considerable artistic talent and has painted quite a few pictures of genuine merit. She is now doing some art work at Lenox College and will receive a diploma from that department next June.

The Doctor and Mrs. Livingston are supporters of the Presbyterian church and the former served as treasurer of the local church for many years. For a number of years he has been a member of the board of directors of Lenox College and has at all times displayed a lively interest in the cause of education. Fraternally he belongs to the Masons, being a member of Burns Lodge at Monticello. He holds membership in the county and state medical societies, the Austin Flint Medical Society and the American Medical Association and in this way keeps in touch with the work done by his colleagues and is also enabled to give them the benefit of his experience. Mrs. Livingston is a member of the Order of the Eastern Star and is worthy matron of Sunbeam Chapter, of Hopkinton. She is president of the Clio Club, Hopkinton's Literary Society, and an active worker in the various women's organizations.

The Doctor owns the family homestead and also some adjoining land, his holdings aggregating three hundred and forty-two acres of land, besides his palatial twenty room residence, which is located in the midst of a park on a hill overlooking the town of Hopkinton and the surrounding country. His life has been spent in useful but unostentatious activity, and he has the satisfaction of knowing that he has not only won success for himself but has worthily performed services that are honorable and important and that the community is the gainer for his life in its midst. 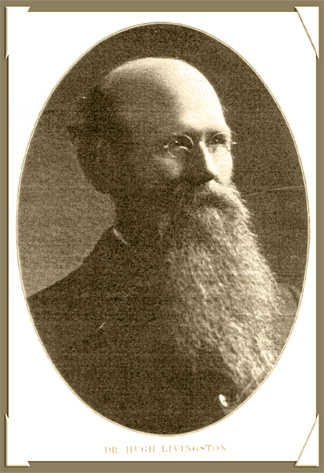