There will be a private graveside service held in the Memorial Park Cemetery with Pastor Kathy Graves officiating.

Memorials can be directed to the family of Dale Rasmussen.

Dale, the son of Louie O. and Gladys I. (Berg) Rasmussen, was born August 15, 1935, in Northwood. He attended Worth County country schools and graduated from Kensett High School. He entered the U.S. Army in 1954 and served two years in Guam. Following his military service, he was employed for several years at Allied Mills in Mason City. He began working as a Postal Clerk for the Mason City Post Office in 1964 and retired in 1997.

On April 18, 1958, Dale was united in marriage to Janice Marlene Prull at the Christian Reformed Church in Kanawha. They resided in Mason City all of their married life. Dale was a member of Trinity Lutheran Church. He enjoyed all sports and was a lifelong Iowa Hawkeye fan. 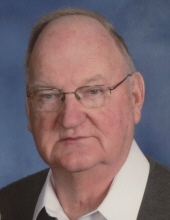