BUFFALO CENTER  Marlyn Hanson, of Buffalo Center, wasnt sure what he was in for when he joined the Army in 1952. It turns out he got to choose.

The Rake High School graduate spent about a year in eastern Korea with the 196th Field Artillery Battalion in a valley dubbed the Punchbowl. He arrived in Korea by boat after training at Fort Crowder, Missouri; Fort Hood, Texas; and Fort Chaffee, Arkansas. The rest of the journey was by land.

We went by train as far as it would go and then we went by truck to the Punchbowl, so that was kind of scary because if we wouldve been cut off ... , Hanson said, trailing off. By the time Hanson got there in January 1953, the American and opposing forces were entrenched on the mountainous ridges.

We were on the top on this side, and the enemy was on top on the other side, Hanson explained. It was 8-10 miles across, that bowl, and we were there the whole time, but we was below the ground.

Soldiers slept below the ground in order to protect them from incoming rounds. The mess hall, where Hanson worked, was one of the only above-ground structures. Soldiers covered its tin roof with dirt and grass to camouflage it from attack. Even then, it wasnt safe.

You wouldnt dare go walk up there behind the mess hall, Hanson said. Itd be all booby trapped.

Heavy fighting had turned the Punchbowl into a desolate place.

There had been so many rounds that there wasnt much, he said. The trees were just about non-existent. They were just little bushes.

The soldiers liked some of the food. Some dishes werent big hits.

They had chicken noodle soup, that was the best, Hanson said. And, they had green pea soup, which nobody liked. I wouldnt eat it now.

Hanson was there less than a year.

The fighting stopped Aug. 31. And, then we stayed in the same position until I went home the end of September, he said. So I was there just 11 months, 19 days and two hours.

These days, Hanson doesnt think about Korea very much.

As long as I didnt get hurt, and nobody right next to me got hurt or anything, why then I really dont think about it, he said. Now, itd be different I think if I wouldve been hurt or if my buddies, friends, got hurt, but it didnt happen.

I was very lucky that way. 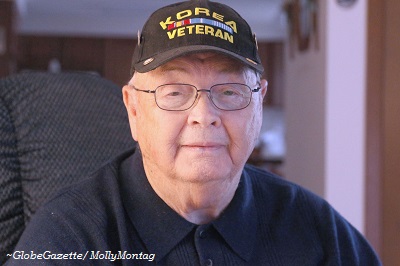