MASON CITY  Roland Gorkowski was a 20-year-old farm kid from Rock Falls when the Army sent him to Korea.

Gorkowski, who died in 1979, didn't talk much about the war when he returned home. But he wrote home to his parents regularly when he was in Korea and his daughter, Rhonda True of Mason City, has preserved many of his letters.

Collectively, they tell a story of a kid who was thousands of miles away from home, sometimes in awe of what he was experiencing, other times cynical; sometimes describing primitive farm equipment he was seeing, other times wondering how the crops were doing back home.

All of his letters were written in legible cursive, as if he was sitting at a desk in a comfortable office somewhere instead of in a dusty tent in the middle of nowhere.

"We are south of the 38th parallel about four miles," he wrote in June of 1951. "We got our positions dug in pretty deep. We practice firing every day. Sure a waste of ammunition. I guess we fire some demonstration for some big shots the next three days. Tomorrow night we get to go to a Jack Benny program. Should be pretty good."

(Jack Benny was a famous comedian of his day with both radio and television programs.)

The living conditions for the soldiers were plain and simple. "We live in a big tent with mosquito netting all around it. Sure cool at night," he wrote. "It finally rained the other day and settled all that dust. In the daytime, it must be 100 degrees."

The soldiers got treats on Independence Day. Gorkowski wrote to his parents, "We had ice cream and turkey for the 4th of July. Also we got six cans of beer but they were warmer than hell."

The Iowa farm boy inquired often about how the crops were doing back home and wrote about the agriculture he was witnessing.

"We have been on the train the last few days. Japan sure is a beautiful country. All the farms are like garden spots," he wrote. "The wheat is ripe here. They thresh by beating sticks on it. The corn is about waist high and the beans about knee high. They plant rice in mud knee deep. Their plows are old wooden things. They pull them with a Holstein cow and milk her at night. The cows in the states really get a break, ha!"

In one of his letters he mentioned how skinny the mules were and how they were always kicking someone. Also, he wrote, "Heard a pig squeal; long time since I heard that."

Gorkowski was exposed to many different cultures, as he explained in this letter. "Yesterday, I got mixed up with a bunch of French soldiers. They are really good looking men. Also, I see Canadians, Greeks, Turks, Filipinos and Belgiums. Do they ever like USA cigarettes."

True said she didn't think her father was in combat in Korea but he witnessed some things he would never forget.

In October of 1951, he wrote home, "On the train, along the tracks, people are just lined up for cigarettes and candy the soldiers throw out to them. Yesterday, we hit one of them. Killed him instantly. I seen it all happen. There are so darn many of them. You never seen so many kids as there are here."

After the war, Gorkowski came home to Rock Falls and dairy farmed with his father. He suffered a brain aneurism and died in January 1979. He was 48. 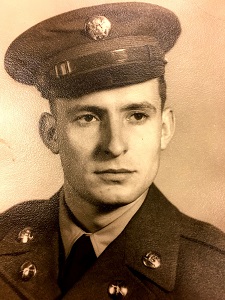