Robert D. Leahy, 88, of Cedar Falls, Iowa, passed away on April 18, 2016 at Sartori Memorial Hospital in Cedar Falls from complications of lymphoma.

Bob was born on July 29, 1927 in Denison, Iowa to Melvin and Marie Christensen Leahy, where he was raised and graduated from Denison High School with the class of 1945. After graduation, he enlisted in the U.S. Navy for the duration of World War II.

﻿ In the fall of 1946, he enrolled at Buena Vista College in Storm Lake, Iowa and later transferred to Valparaiso University in Valparaiso, Indiana where he attained a bachelor of science degree in education in 1950. His first teaching job was in Vail, Iowa where he taught secondary math and science and coached boys and girls basketball.

On June 6, 1954, Bob married Beverly Jean Williams in Odebolt, Iowa. Soon thereafter, they moved to Cherokee, Iowa where they both worked as teachers for two years. In 1956, Bob and Bev moved back to Denison where they both taught school for three years and Bob attended graduate school at the University of Iowa during the summer break(s). In August of 1959, he graduated with an MBA in Educational Administration from the University of Iowa. After his graduation from the U of I, Bob served as principal at Manning High School from 1959 to 1962.

In the fall of 1962, Bob and Bev moved to Iowa City, Iowa where Bob served as Director of Admissions at the University of Iowa until 1975. Son, John was born in Iowa City in 1963 followed by another son, Paul in 1965.

After a short tenure as Registrar at Adelphi University in Garden City, New York, Bob and his family moved to Cedar Falls, Iowa where Bob assumed the position of Registrar at the University of Northern Iowa in 1976. With a continued passion for education and a love of working with students, Bob held this position until his retirement in 1991.

Although Bobs life work was deeply rooted in education, his first love and lifelong passion was the game of golf. He was introduced to the game by his parents at a young age and played brilliantly with only a 3, 5 and 7 iron(s), two woods and a putter until 1946 when he purchased his first set of golf clubs with his discharge money from the Navy.

After his wise and timely investment, Bob quietly excelled in the game and spent much of his free time honing his golf skills on Iowas many and marvelous golf courses. He clinched his first Iowa Amateur win in 1954 and went on to win Iowa Amateur Golf Championships in 1956 and 1957, as well as the Iowa Masters tournament at Veenker Field in Ames, Iowa in 1953 and 1957. He also won the Northwest tourney in Spencer in 1958 and in 1977. He is the only Northwest tourney winner to win on both the old Spencer Country Club golf course as well as on Spencers new golf course.

Bob also won the Herman Sani Invitational at Hyperion Field Club in Des Moines in 1966 and served on its scholarship committee for over 50 years in the selection and awarding of educational scholarships to many college-bound students. He also captured the winning title at the 1959, 1961 and 1971 Tournament of Champions golf tourney in Atlantic, Iowa.

In 1991, Bob was humbled and honored to be inducted into the Iowa Golf Hall of Fame, and was twice celebrated as Iowas Senior Player of the Year in the 1990s, as much for his integrity and sportsmanship as for his skills on the course.

Perhaps the most distinguished honor of Bobs life was the establishment of a golf award to be given in his name. Initiated in 2014 by the Iowa Golf Association, The Leahy Medal is awarded annually to both men and women golfers for outstanding achievements in competitions played in the state of Iowa.

Although a fierce competitor, Bob was also a consummate gentleman  on and off the course  who gave generously of his time and resources to a variety of local organizations. Among those who will miss his energetic support and participation are the Cedar Falls Lions Club, St. John Lutheran Church, UNI Panther Athletics, UNI Colleagues Friendship Club and the Iowa Golf Association of which he was a lifetime member of its board of directors.

Though Bob never considered his pristine voting record anything more than his civic duty, it was indeed extraordinary. In 70 years of voting eligibility, he never missed a single opportunity to vote in a general, primary or special election.

Bob is survived and lovingly remembered by his wife of 61 plus years, Beverly; his sons, John R. (Dana) Leahy of Urbandale, Iowa, and Paul D. Leahy of Linn Creek, MO. Also surviving are three grandsons: Samuel (Kari) Leahy, Stuart (Danielle) Leahy and Michael Leahy; and his in-laws, Mertie Williams and Chuck & Barb Williams; along with nieces, nephews and many treasured friends.

Bob was preceded in death by his parents and his brother, Tom Leahy.

Services will be 11:30 a.m. Friday, April 22, 2016 at St. John Lutheran Church. Visitation will be from 4:00 to 7:00 p.m. Thursday at Dahl-Van Hove Schoof Funeral Home. In lieu of flowers, memorial contributions may be made in Bobs honor to the Herman Sani Golf Scholarship, Iowa Golf Association, St. John Lutheran Church in Cedar Falls or to the NewAldaya Chapel in Cedar Falls. Condolences may be left at www.DahlFuneralHome.com . 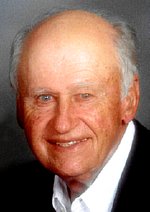