Norma graduated from Oelwein High School, Oelwein, in 1938. She was a homemaker and also worked at City Laundry in Oelwein. She was a member of Fairbank United Methodist Church.

Preceded in death by her parents; a brother, Dalys J. "Hap" (Phyllis) Heidt; a half sister, Anna (Bert) Miller; two stepdaughters, Dee Lenz and Leta Riordan; and a great-grandson.

Services: 10:30 a.m. Friday at United Methodist Church, Fairbank, with burial in Fairbank Cemetery. Visitation from 4 to 7 p.m. Thursday at Woods Funeral Home, Fairbank, and for an hour before services Friday at the church.

Memorials may be directed to Care Initiatives Hospice, the church or memorial of donor's choice. 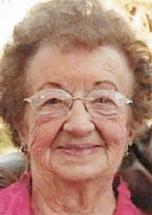