Mr. Devine was a letter carrier for the U.S. Postal Service for 22 years, retiring in 1989. He served with the US Army during the Korean War.

Services: 10:30 a.m. Tuesday at Queen of Peace Catholic Church, with burial in Mount Olivet Cemetery. Full military rites will be conducted by Waterloo and Evansdale AMVETS Post 19 & 31. Public visitation from 4 to 8 p.m. Monday at Hagarty-Waychoff-Grarup Funeral Service on West Ridgeway, where there will be a 7 p.m. rosary. Visitation also for an hour before services Tuesday at the church.

Memorials: will be established at a later date. 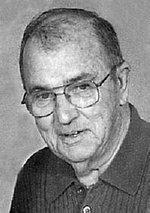