He was born April 3, 1925. in Ottumwa, son of John and Alta Jaster Bergmeier. He was employed by Rath Packing from 1942 to 1981, retiring from the boning department. He also owned Bergmeier Sanitation of Hudson.

Memorials may be made to the family.

The Hudson Masonic Lodge 669 will conduct Masonic services at 7 p.m. Monday at the funeral home. Visitation will be after 6 p.m. Sunday and from 9 a.m. to 9 p.m. Monday. 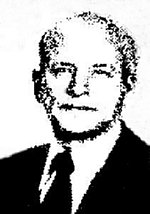