Mrs. Voshell was a homemaker and a 50-year member of Hammond Avenue Brethren Church.

Preceded in death by: her parents; and an infant sister Maxine.

Services: 10:30 a.m. Saturday at Hammond Avenue Brethren Church, with burial in Garden of Memories Cemetery. Public visitation from 4 to 8 p.m. Friday at Kearns, Huisman-Schumacher Chapel and for an hour before services Saturday at the church. 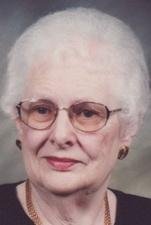