Topeka - A 28-year-old airman due for discharge from active duty at Forbes Air Force Base here next Friday, drowned last night while swimming in a farm pond. Air Force officials identified him as Leslie Kaston, airman first class from New Albin, Iowa. He is survived by his widow and two daughters.

Military funeral services for Leslie Kasten, 28, who drowned Friday in a Kansas lake, will be held Tuesday at 1 p.m. from the Martin Funeral Home in Waukon, and at 2 p.m. from the Zion Lutheran Church, Eitzen, the Rev. F.F. Ehlert officiating. Burial will be in the church cemetery.

Waukon's American Legion post will participate in military rites for the Air Force man, who was to have been discharged this week. He drowned in Lake Richland.

He was born in Caledonia, Minn. October 22, 1926, the son of Mr. and Mrs. Arthur Kasten, and married the former Adeline Fink of New Albin, April 27, 1951. Mr. Kasten was a farmer before entering military service. He served in Korea about one year.

Dies in Drowning Seven Days before Discharge from Active Duty

After attending school at a rural Allamakee County school, he went into farming with his brother, Marlan. On April 27, 1951, he married Adeline Fink of New Albin. Three months later, on July 29, 1951, as the war in Korea was ongoing, he enlisted in the United States Air Force.

Upon completion of Basic Training, Leslie was assigned to duty in Korea. In January, 1953, six months before the Armistice was signed at Panmunjom, he returned to the United States and was assigned to Forbes Air Force Base in Topeka, Kansas. With his family, he settled in nearby Richland, Kansas.

On July 22, 1955, seven days before he was to complete his service to his country and be released from active duty, an accidental drowning claimed his life. At that time, Leslie Kasten left behind his wife Adeline and two daughters, Diane and Sandra; his parents; two sisters, Mrs. Dawson Ashbacher (Ruth) and Mrs. Charles Fetketter (Delores); and four brothers, Marlan, Paul, Hillery and Gailord. Hillery and Gailord also served in the United States Air Force.

Two months after his death, Leslies wife Adeline gave birth to their third child, Robert. All three of Leslies children, Diane (Mrs. Lloyd) Erickson, Sandra Farrell, and Robert, who is married to the former Collette Connor of Lansing, reside in New Albin.

~Allamakee Journal, Lansing, Iowa (Part of a Memorial Day tribute in the 1990s) 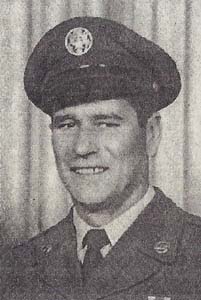