Alfred was born March 15, 1905 to Fredrick S. and Anna (Umbreit) Hansmeier on their farm in Makee Township, rural Waukon, Iowa. He attended the Elk rural school and graduated from the Waukon High School. On June 25, 1931 he married Bernice Zieman at St. Mary's Church at Dorchester, Iowa. Red worked as a farmer and on the Allamakee County road crew for a time after their marriage. From 1939-1946 he served as auditor for Allamakee County and as assessor from 1947-1948. He also did some carpentry work. Red was a member of the Zion United Church of Christ, Iowa Assessor's Association and a lifetime member of the Allamakee County Fair Board.

Alfred Red Hansmeier, Waukon, retired Allamakee county assessor, received a plaque denoting 30 years of service at the recent annual school of the Iowa State Association of Assessors in Des Moines. Hansmeiers service actually exceeded 30 years by quite a bit. He was the first assessor Allamakee county had, taking the post when it was created in 1941, and he served until his retirement in 1978. 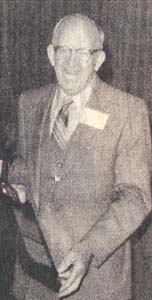