Funeral services for Leon K. Olson were held Saturday, March 27, 1999, at 1:30 p.m. in the Good Samaritan Center at Postville, Iowa. The Rev. Gary Catterson officiated. Beverly Bacon was the organist. Burial was in the Postville Cemetery. A Masonic Memorial Service was held Friday evening at the funeral home. The Schutte Funeral Service was in charge of arrangements.

Leon Kenneth Olson, son of Martin and Henrietta (Gulbrandsen) Olson, was born on July 8, 1916 at Postville, Iowa. He passed away on Saturday, March 20, 1999 in Veterans Memorial Hospital at Waukon, Iowa, reaching the age of 82 years, nine months and 12 days.

He attended school in Postville, graduating with the class of 1935. He also attended Upper Iowa College in Fayette, Iowa. Leon served in the US Navy during WW II.

On October 17, 1946, Leon was united in marriage with Neva L. Bertelson at the Little Brown Church in Nashua, Iowa.

Leon worked at the Co-op Creamery in Sanborn, Iowa and the Postville Creamery, eventually becoming the "Buttermaker". When the milk plants in northeast Iowa merged to form what is now known as Swiss Valley at Luana, he worked there, becoming the manager prior to his retirement in 1982. In 1968 Leon was badly burned in a boiler accident at the plant and suffered a stroke in 1982. Leon and Neva enjoyed their house at the river and he was an avid fisherman. Other interest included woodworking, painting, and playing cards.

Surviving are his sister Jean Salmon and her husband Harold of Howell, MI; Neva's stepbrother Robert Burns and his wife Barb of Postville. Also surviving are three nephews, Craig, Keith and Gary, and a niece, Pamela.

The photo was added 12/7/2011 by the daughters of George Potter SR, who is pictured with Leon K. Olson. They were shipmates during WWII 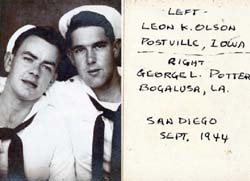