Dubuque, Ia. - Funeral services were held in Immaculate Conception church, Lansing, Tuesday last week, for the Rt. Rev. George Haxmeier,
who at the time of his death at St. Anthony's home here was the oldest priest in the archdiocese of Dubuque. Msgr. Haxmeier, at the
age of eighty-eight, was not only the oldest by reason of his age but also by reason of his years of service that this year totaled sixty-five.
In September of last year Msgr. Haxmeier retired as the pastor of the Lansing parish after having been stationed there for sixty-three years.
This is believed to be a record in the Church in the United States. With his retirement to St. Anthony's home, the prelate was named pastor
emeritus of the Lansing church. Msgr. Haxmeier was born at St. Donatus in Jackson county on September 20, 1856. He was educated at
Mt. Calvary college, Fond du Lac, Wis., St. Francis' seminary in Milwaukee, and the Grand Seminary in Montreal, Canada. He was ordained
in Montreal on December 20, 1879. He served as assistant priest at St. Donatus for about a year, after which time he was appointed pastor of
the Immaculate Conception church at Lansing. On December 17, 1921, he was elevated to the rank of domestic prelate and in the same year
was designated as a diocesan consultor. He also served as dean of the Lansing deanery. 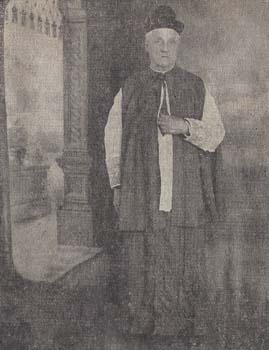