Miss Kester died at 12:15 a.m. Sunday in Lutheran hospital, LaCrosse, Wis., about four hours after the accident at the north crossing in New Albin. Her car was thrown 100 feet after impact with the northbound train, reportedly traveling about 30 miles per hour.

The death was Allamakee countys sixth traffic fatality of the year.

A 1974 graduate of Knee high school at Lansing, Miss Kester was a student at Winnona (Minn.) Technical Institute.

Surviving in addition to her parents are a sister, Louise at home, and paternal and maternal grandmothers, Mrs. W. E. Stevens of New Albin and Mrs. J. R. Welsh of Oelwein.

Janice Colleen Kester, 18, of New Albin, died Sunday, Dec. 22, in a La Crosse, WI, hospital as the result of injuries received in a car-train crash Saturday evening in New Albin.

She was born Aug. 10, 1956, in La Crosse, to Mr. and Mrs. Robert Kester of New Albin. She was a 1974 graduate of Kee High School, and was a student at Winona Technical Institute, Winona, MN.

Friends may call after 2 p.m. today at the New Albin Funeral Chapel, with the Rosary to be at 7:30 p.m.

Burke-Thornburg Funeral Home, Lansing, is in charge of arrangements. 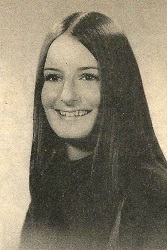