Eugene Noel Arnburg was born January 4, 1936 in Adair, Iowa, the son of Frederick Charles William and Pauline Isabel (Woods) Arnburg. He was baptized and confirmed at the First Presbyterian Church in Adair. Gene graduated from the Adair High School in 1954. He served in the United States Army from 1955 until 1957. Gene was united in marriage with Connie Louise Moorhead at the First Presbyterian Church in Adair on June 7, 1959.

Gene worked as an electrician at various places in Iowa. He owned and operated an electric motor repair and electrical contracting shop for several years while operating a cellulose insulation manufacturing company in Postville. He then became an instructor for the electrical department at Northeast Iowa Community College (NICC) in Calmar, Iowa for over twenty-five years. In his "retirement years", Gene assisted the college as an interim instructor for an additional three years. Gene and Connie owned Family Total Health and Family Laundry in Postville. He was a firm believer in education and contributed to NICC scholarship funds through his vending machine business.

Gene's life was based on the foundation of family, church, and community. He was an active member of the Presbyterian Church for 56 years, church choir, various community and church committees, and notably the cherished Mother and Daughter Banquets, Lions Club, Postville Fire Department, and Boy Scout Leader. Gene and Connie were involved with several mission trips in South Dakota (construction of a church), Mississippi (Hurricane Katrina rebuild), Alabama (Tuscaloosa tornado), and North Dakota (Floods).

Eugene was well-known for his constant beaming smile, optimistic attitude, and finding the good in all people. Gene welcomed everyone into his life with open arms. He was a wonderful role model to all who were fortunate enough to meet him.

He was preceded in death by his son Doug who died in 2007; a daughter who died in infancy; his parents; and one brother-in-law Gary Crawford.

NOTE: Eugene N. Arnburg was inducted posthumously into the NICC Hall of Fame on October 15, 2012. His obituary did not state the name of a cemetery where he was interred. 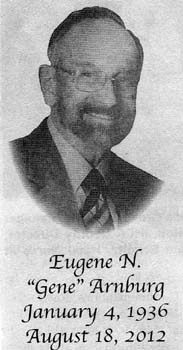