Donald Simon Hager was born on May 3, 1920 on the Ludlow Township farm of his parents, Albert Ernest and Anna (Helming) Hager in Allamakee County, near Waukon, Iowa. He was baptized and confirmed at Zalmona Presbyterian Church where he remained a life-long member. He attended Ludlow No. 2 rural country school and graduated from the Waukon High School in 1938. On February 7, 1941 he married Alice Lorayne Palmer at the Presbyterian Parsonage in Waukon, Iowa. They farmed with his parents for several years before taking over the operation of the Hager Family Century Farm on their own. The farm was typical for its time and included a dairy herd, hogs, other livestock, and grain. In 1977 Donald and Alice retired and moved to Waukon.

Donald served as treasurer for the Ludlow Cooperative for a number of years and was a former leader for the Ludlow Future Farmers 4-H Club. He enjoyed playing cards, fishing, and visiting with friends. Family was important to Don and he'll be remembered for the consideration he showed his parents, the faithful care he gave his wife Alice in her later years, and the joyful times he spent with his children, grandchildren, and great-grandchildren.

He was preceded in death by his parents, and his wife Alice who died in 2003. Casketbearers were his grandchildren: Scott, Jeff, and Steve Daugherty; Mike, Jon, and Drew Hager; Christy O'Neill; and Dillon and Cassie Hager. 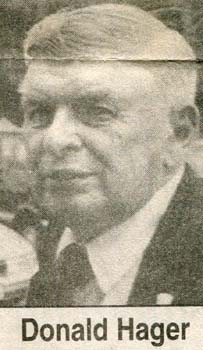