Mrs. Lucinda Chickering, 74 died Wednesday morning at the Henry Waterman home where she had been living for the past week. She had been in failing health for the past several months.

As Lucinda Jones daughter of Mr., and Mrs. Elam Jones, she was born in Union Prairie township May 4 1873. She was one of a family of 13 children.

After her marriage to Edwin Chickering in Decorah about 26 years ago, they lived in several towns in Iowa and in the East for a time.

She is survived by one sister Mrs. L.G. McConaty of Decorah, and one brother Frank Jones, Strathmore, Alberta Canada.

Funeral services will be held Friday afternoon at 2:00 at Martins funeral home with the Rev A.H. Grossheim, officiating. Burial today will be in Oakland cemetery

Note: The photo of Lucinda Jones Chickering, daughter of Elam & Lucinda (Neff) Jones, was likely taken by her husband Edwin Chckering. It has  the Chickering photography stamped signature on the lower right, although very difficult to see in this photo. 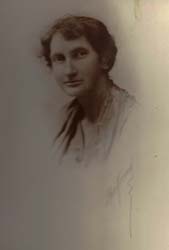