Funeral services were held at 11 a.m. on May 21 at the Alliance Missionary Church in Marshfield, Wis. for Ann E. Piguet, 96.

She died on Sunday, May 18 at the residence of her daugh­ter and son-in-law, Mr. and Mrs. Kermit (Maxine) Noth.

The former Ann E. Young, she was born on November 12, 1889 in Allamakee County, Iowa, the daughter of of William H. and Mary E. (Bul­man) Young. She attended rural Lansing schools and Lansing High School. After completing her education in 1909, she taught in a rural school in Allamakee County until 1912.

She was married to Harrison Piguet April 4, 1912 at Mt. Hope Church in English Bench. After their marriage, they farmed in rural Lansing until 1927. In August 1927 the family moved to the Auburn­dale, Wis. area, where they continued to farm. She retired in 1952.

Besides Mrs. Noth, she is survived by another daughter, Mrs. Namen (Lola) Belknap of Wisconsin Rapids, Wis.; a son, Vernon A. Piguet of Auburndale; 18 grandchildren and 33 great-grandchildren; seven great-great grandchild­ren; and one brother, Clarence M. Young of Auburndale.

She was predeceased by her husband in February of 1955; son, Kenneth, and a daugh­er, LeVelda; one grandson; her parents, two brothers and one sister.

When she was 2, the family moved to North Dakota where her father homesteaded. At the age of 6, the family returned to Iowa where she attended a rural school through the eighth grade. After completing high school at Lansing, Iowa, in 1909, she taught in a rural school until 1912.

At that time the family moved to the Auburndale area where she continued to farm and raise a family of two sons and three daughters. She left the farm in 1952 when she retired. She has been active in the Friendly Neighbor Club for many years and still enjoys handiwork, such as quilt making and crocheting afghans. 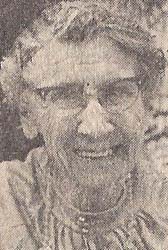