She grew to young womanhood in Connecticut and then moved to Lewiston, Minn., where she met and married John Hahn, who died Sept. 27, 1926.

While living in Union City town­ship Mrs. Hahn united with the Mount Hope Presbyterian church in 1905. Later she moved to the Dorchester vicnity, where she lived until the last few months of her life which she spent with her daughter.

Funeral services were held Monday at Dorchester, with burial in the cemetery near the Mount Hope church.

Mrs. John Hahn passed away Saturday, January 28th, 1939, at the home of her daughter, Mrs. Roy Sires, at Sumner. Death was caused by the infirmities of age.

Mrs. Hahn, who was Margaret Schaffer before her marriage, was born April 27, 1857, in Conneticut, where she grew to womanhood. She moved to Lewiston, Minn., where she met and married John Hahn. To this union 12 children were born, five of whom preceded their mother in death. Her husband passed away September 27, 1926.

In 1905, while living in Union City township, Mrs. Hahn united with the Mt. Hope Presbyterian church. Later she moved to the Dorchester vicinity, where she lived until four and a half months ago, when she went to Sumner to make her home with her daughter.

The remains were brought from Sumner and funeral services were held at the Methodist church at Dorchester Monday afternoon, with interment in the Mt. Hope cemetery. Mrs. Carl Ehde, Mrs. H.E. Peterson and Mrs. Ruth Scoughton sang several hymns.

Sleep on, dear mother, sleep and take thy rest,
Lay down thy head upon thy Savior's breast.
Calm is thy slumber as an infant's sleep,
But thou shalt wake no more to toil and weep.
Thine is perfect rest, secure and deep,
Clothed in the spotless robe He gives His own,
Until we know, even as we are known.

*NOTE* Lee Hahn is listed as her child, but was actually the child of her daughter, Barbara (Hahn) Lane. Margaret and her husband raised Lee as their own.

Margaret, my 2nd great grandmother, was the daughter of John & Barbara (Wish) Schaffer.

If you have addition information to share on the Hahn family, please contact me as I have many unsolved mysteries on this family as well as that of Margaret's husband and my 2nd great-grandfather, John Hahn. Thank-you! 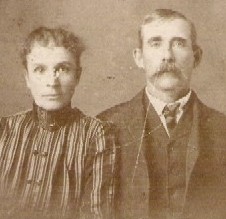