Where any movement arouses such intense and general interest as does the present union evangelistic campaign, it is always interesting to the people at large to learn something of the life and character of the man who is the mainspring of the movement.

The leader of this movement, Rev. Milford Hall Lyon, has had what might be termed a remarkable history. He was born near Waukon, Allamakee county, Iowa, on February 10, 1868, the youngest of fourteen children. He came from a long line of hardy stock, the blood of many nationalities being commingled: French, English, Scotch, Welsh and Irish, make up this combination. His grandfather Lyon was of Huegenot stock, a Methodist pastor in New Jersey. His mother's father, Holder Sisson, fought with General Scott at Lundy's Lane in the war of 1812, and was a captain of the Chicago militia in the Black Hawk war. General Ethan Allen, hero of Ticonderago, was his mother's great uncle.

Dr. Lyon's mother is still living, at the advanced age of ninety years. Her home is at Waterloo, Iowa. She is doubtless the last survivor of the occupants of Fort Dearborn in Chicago, being at that time a girl of eight years of age. Dr. Lyon's father was one of the early pioneers. He came out to Niles, Michigan, when a youth of 18, and frequently came to Fort Wayne in the years between 1836 and 1840. The father and mother of the evangelist were married and settled in northwestern (sic, northeastern) Iowa in 1842, when neighbors were scarce.

It was when the subject of this sketch was very young that the parents left the home in northwestern (sic) Iowa and located on a farm near La Porte city, just south of Waterloo. It was here that Milford Lyon's boyhood days were spent working on the farm and walking two miles to attend the village school. He completed the high school course at the age of 13 and soon moved with his parents to Humboldt, in the northwestern part of Iowa, where he spent a year in a lawyer's office, preparing a set of county abstract books. His father having engaged in the hardware business, young Lyon spent more than four years clerking in the store; working at the bench in the tin shop during the last two years of this time, he had charge of the collection of the accounts and the purchase of goods.

During these years while he was out of school, young Milford had an ambition to return to his studies, but the way did not open until the autumn of 1887, when, his father having sold the store, he went to Iowa City, where he entered the academy. Doing two years' work in one, he completed the academic course the following June, and next fall entered the state university. During the succeeding four years he earned his entire expenses by teaching mathematics in the academy, and working as a traveling salesman during the summer, selling goods for an Iowa City factory.

Lyon had entered college with the intention of studying for the law and going into politics, and having turned from this to teaching he felt more and more impressed with the needs and importance of the Gospel ministry. At the close of his second year as college president, he resigned his position to accept a call to the pastorate of the First Congregational church, Harvey, Ill. After a year and a half here, he accepted the pastorate of the Bethel church, Windsor Park, Chicago. During this pastorate the church membership was nearly doubled and a new building was erected.

Feeling the great need of evangelistic work all over the land, Dr. Lyon decided to resign from his pastorate and enter what seemed to him a broader field of christian usefulness. It would naturally seem a very perilous venture to resign from a successful pulpit and a good salary, to start out, not knowing where, without any assurance of financial support for himself and family. Yet this is what Dr. Lyon did and it cannot help but make him smile when people say he entered evangelism for the money there was in it.

Naturally he had to start in a small way, at first in single church meetings. But from that beginning his work has constantly grown. During the past fifteen years he has spoken more than seven thousand times in twenty-four states and has never missed a service on account of ill health. As a result of his work there have been at least a hundred thousand conversions.

Having been a pastor, Dr. Lyon naturally looks at evangelism from the standpoint of the men who are to remain on the field after the evangelist has left. He frequently says that it was one of the motives that impelled him to enter evangelistic work that he might help to lighten the loads that rest on the shoulders of the pastors all over the land. During the past year he has received more than twenty invitations from Indiana cities to conduct union campaigns.

Four years ago the degree of Doctor of Divinity was conferred upon Dr. Lyon by Wheaton college, "in honor," said the resolution of the board of trustees, "for his achievements in the kingdom of God." For fifteen years Dr. Lyon lived at Wheaton, Ill., but has recently built a home, "Faerholm," at Winona Lake, Ind.

He is the author of two books, the first of which, "The Lordship of Jesus," has gone into the seventh edition. The later book, "For the Life That Now Is." has reached the third edition. His ministry has centered especially about the supreme truth of the kingship of Christ. It was at his suggestion that the publishers of the song book used in the meeting called the new book by the name which is the heart of Dr. Lyon's ministry. "Make Christ King."

Dr. Lyon often says that his experience as a traveling man has been of untold value to him in the ministry and that if he had the training of young men preparing for religious work, he would send them out on the road to sell goods for at least one year of the course.

It is evident that he did not waste much time in those years, for he ranked first in his class of fifty for scholarship for the entire course. He also spent much time in extra literary work, engaging in the university oratorical association; and then in the state oratorical contest he won first honors over the prize contestants from fourteen other colleges. Later in the interstate contest at Lincoln, Nebr., he received the highest marks ever given, being graded first by three judges, and second by a fourth judge. This was the same oratorical association in which Senator La Follette, of Wisconsin, and ex-Senator Beveridge, of Indiana, won highest honors a few years earlier.

Before his graduation he was selected president of Ellsworth college, Iowa Falls, Iowa, and entered upon its duties immediately upon finishing his university course. Here he remained for two years directing the financial and executive management of the school, besides teaching Latin and literature.

Mr. Lyon had entered the university as a unitarian, although reared in a Christian home, he had drifted into what he termed, liberal thought, and for the first two years in college, had been entirely indifferent to Orthodox Christianity. It was during the visit of Mr. S.M. Sayford, of Boston, who for ten years worked among the students of American colleges, that Lyon came out into a definite faith in Christ, and made a public confession of his belief.

During the remainder of his college course he was active along religious lines, being chosen by the state Y.M.C.A. as a member of the state deputation and by the international Y.M.C.A. to deliver the address at their national convention in Kansas City, to the colleges of America.

The article included the photo of Dr. Lyon below: 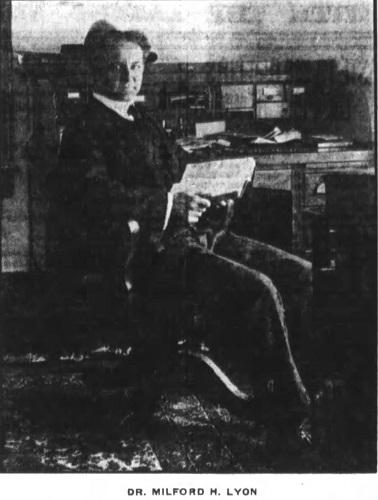