With more than 40 years of medical practice behind him, he is still just as busy as ever with patients, and has no intention of quitting as long as hes able to keep up his practice.

Forty-five years of his medical life have been spent in Allamakee county. He was born Feb. 29, 1880, in Clayton county. As a leap year baby hes had only 17 birthdays in his 71 years.

He is the son of the late Mr. and Mrs. Christopher Dillon, and was graduated from Strawberry Point High school. He received his medical education at the University of Illinois, and practiced nine months in Chicago while attending a clinical school.

He then spent three months at Volga before locating at Waterville in January, 1906. There, for 25 years, he served the health needs of Waterville and the surrounding countryside. Dr. Dillon remembers well the countless times he had to find a way over snow blocked and mud bogged roads during those years.

There were compensations, though. Several years ago, when the Waterville High school girls basketball team was playing in the finals of the state tournament at Des Moines, a telegram was delivered to the players on the floor.

It read, "Congratulations to my babies," and was signed by Dr. Dillon. He had delivered every one of the team members into the world.

The long time physician figures he has assisted in nearly 3,500 births during his 46 years of practice, and has taken care of five generations of some families.

He is now using his 14th automobile, and says he has averaged about 13,500 miles a year since he first started driving a car.

Twenty years ago Dr. Dillon came to Waukon, and he declares his practice seems to get larger all the time. A room at the new Veterans Memorial hospital in Waukon was furnished in his honor by his Waterville friends.

His wife is the former Clemense Kelly, who taught school at Waterville before her marriage. They have an only daughter, Mrs. Emmet Sullivan, of Waukon, and two grandsons.

Source: Newspaper clipping from unknown newspaper, circa 1951 or 1952 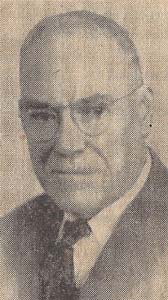