Tat has served on the New Albin City Council since 1947 and was appointed mayor in 1968. There were three terms when he didn't seek re-election and yet was written in by the voters. Bob Bulman sought the job only after Tat said he would not run.

"Bob has a lot of initiative. He is honest and I know he will be a fine mayor."

A question about accomplishments triggers his modesty. "It's not the individual that makes a show or a big blow, it is the good people you have behind you.

"I can boast that I worked for 23 years with the best city clerk New Albin ever had, Henry Becker. He is a solid, sound, sane man. Without him, New Albin would have been in shambles.

"The city is now staffed better than ever. Between Henry and me, we have had a good administration. The town isnt any better than what you make it."

When a lot of business people shy away from public service because they feel it adversely affects their business, Tat said he cant tell that it hurt him. "I believe I got the best support from the people anyone could ask for.

"I feel every elected official in a small town should be a business person," he added.

"Tat was as fair a man as you could find, He listened to everyone. No one had more time for the people and spent more time than anyone else would have. Tat had 100 percent support from the people he worked with," Becker said.

Tat confessed that he turned hour and a half meetings into four hour meetings because he always wanted to take the time to listen to what people had to say.

"Im proud of the fact that I stood up for our employees and that I paid attention to the little things that affected our citizens." He recalled the time an elderly lady called him and said she was afraid to step outside of her door because there was a dead rat on her doorstep. He instructed the chief of police to remove the rat or he would have done it himself.

"I've had many fine councilmen. If I could go back 23 years with my right hand man, Henry, I would do it again,"

His praise for the employees came out. "Larry Rice is our chief of police. He is well thought of. I hope he stays.

"We have a good maintenance man in Lenny Mellick and he has capable help from Don Vonderohe. Our plant manager, Forest "Frosty" Sires, has been a plant manager at our sewage treatment facility since 1968. He'll retire with me, too."

The decision to step down as mayor came after the stress from the work began affecting his diabetes.

His hearing is another problem. "I'm an expert on hearing aids. I have eight of 'em.

"At one time, I could do combat with anyone. Now in two minutes, they can snow me." Becker quickly interjected that hearing difficulties were the problem.

"I can deal all right with you," he told a reporter. "But when we get more than two people talking, the sound just turns into a roar."

When Tat joined the council, New Albin's streets were not all blacktopped. The town didnt have complete sewer mains and laterals. During his tenure, a 150,000 gallon reservoir was built. A new city hall with five stall tire station and library has been built and paid for. This year, the city installed three railroad crossings in town and paid for them.

Tat can't talk about his job without talking about John Mendenhall, the man who appointed Tat to the mayor's job. Mendenhall had been elected to the state legislature and chose Tat for his replacement.

"John was a very fine man who preceded me. He got things going in the right direction as mayor.

"We have also been fortunate to have always had very good cooperation from our bank. It is a pretty important institution in a community," he said.

To New Albin people, Tat Sires was the mayor. But in a much larger area, people of his generation know him for his trumpet playing. Until he retired in 1987, he had been with area bands since 1933.

His best known group, The Tyrolians, were formed in New Albin. "At our peak, we played 125 dates a year for many years. And, I loved it. I miss the bands more than I will the mayor's job.

"My biggest honor was being named to the state municipal finance band. I was the only mayor in the group. It was under the direction of my good friend, Jerry Bailey of New Hampton."

He remembers working all night with the band and then coming home and going right to work at his Skelly bulk oil distributorship. Now, it is a Texaco franchise.

The unusual part about this devotion to being a trumpeter in a band for 54 years is that Tat does not drink alcohol. "I am an absolute abstainer from alcoho1." He said his father, James, was the same way.

"Sometimes my abstinence from alcohol has paid off. You have to believe in God and what is right. It's life and you have to make it as easy as you can.

"As mayor, you are the highest elected official in town. It is a fact that sets you aside from others. It is hard to maintain that."

While he was known for taking the time to listen to people, he would not tolerate people who attended meetings after they had been drinking. He had an equal dislike for those who used profanity during a meeting.

He also admitted that he "hated to hear anyone run New Albin down."

His wife, Gladys, is "one of the most wonderful wives a man could ever have. I have four healthy children and I am proud of every one of them."

As for January 2, he said, "Ill miss some of it. I have enough to do here. We have built a lot of dreams here.

"There are a lot of good people, you have to give them a chance. There comes a time of parting in everyone's life. The young people have new, good ideas and I know they will do the right thing in planning for their future." 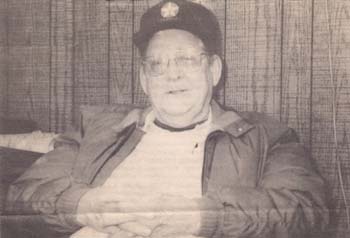