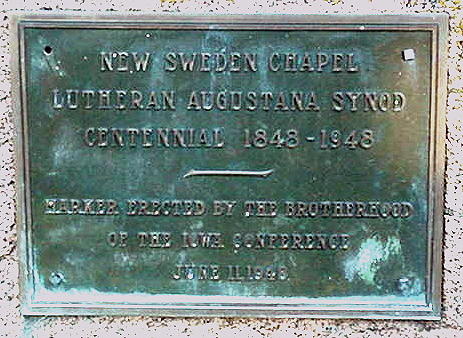 After World War I the automobile, improved roads, a scarcity of ministers and too many churches in a small area combined to make the survival of all these churches impossible. The Fairfield church disbanded in 1922 and services at Upland were discontinued the next year. In 1927 the churches in Lockridge, New Sweden and Salina united to call one pastor. This arrangement worked well until 1940 when they found if impossible to find a pastor for several years. New Sweden was in a particularly serious situation and no one wanted to see this historic church dissolved. After four years Dr. Bersel, president of the synod, proposed that, "As The Evangelical Lutheran Augustana Synod of North America will soon begin the observance of its Centennial, the historic basis for which is the founding of the New Sweden Lutheran Congregation in Lockridge Township, Iowa, in 1848, which congregation has been in existence ever since" the following things be done:

(3) Hold regular services at the Lockridge church and have the pastor live in Lockridge,

(4) Preserve and maintain the New Sweden Church as a historic shrine to be known as "The New Sweden Chapel" and that the Augustana Synod accept the responsibility for its major repairs and renovation.

His proposal was accepted and proved very satisfactory. Richard W. Engstrom became the first pastor of the First Augustana Lutheran Church in August, 1946. The New Sweden Chapel was completely renovated and the original light fixtures electrified and restored so that the building and its furnishings were almost as they had been 100 years before.

As part of the Synod's Centennial Observance, the dignitaries, guests and 1500 of the delegates attending the Synodical conference in Rock Island, Illinois, made a pilgrimage to the New Sweden Chapel on the morning of June 11, 1948. Escorted by police officers, the caravan of large buses and 200 cars stretched for miles. People from Iowa and nearby states swelled the attendance to 3000. Morning services were held in a large tent erected near the Chapel and loud speakers carried the service to those standing outside in memory of the founding fathers the first part of the service was in Swedish and The Most Reverend Erling Eiden, Archbishop of Uppsala, Sweden, delivered the sermon. In the afternoon the New Sweden Chapel was dedicated as a shrine of the Evangelical Lutheran Church of North America by Dr. P. O. Bersell. The marker, erected by the Brotherhood of the Iowa Conference, was unveiled by Mrs. L. L. Swenson Sr. of Ottumwa, the daughter of Rev. M. F. Hokanson. Other honored guests were Mrs. George Stephenson and Mrs. Gus Scott, granddaughters of Peter Cassel, and Mrs. Albert Bergstrom a great-granddaughter. George Stephenson was a grandson of John Danielson who came with Peter Cassel in 1845. The First Augustana Lutheran Church in Lockridge held their own 100th anniversary on September 5th with communion service at the New Sweden Chapel. A former pastor, Ragnar A. Kastman delivered the sermon. After a basket dinner there was an informal service with greetings from former members and Delores Edwards played the organ her great grandfather J. Levendahl had made. Evening service at the church in Lockridge concluded the celebration.

At that time no one dreamed that the Augustana Synod would ever lose its identity, but that happened in 1962 when it merged with other Lutherans to form the Lutheran Church in America. At that time the New Sweden Chapel became the property of the Iowa Synod, L.C.A. In 1975 the Iowa Synod withdrew its minimal support and to save the historic Chapel the First Augustana Lutheran Church of Lockridge asked that it be deeded back to them.

This page was created on 6-28-2001. This page may be copied and used for personal purposes but can not be republished nor used for commercial purposes without the author's written permission.
I am the County Coordinator and the Webmaster, the one who is responsible for the IAGenWeb project for Jefferson County, Iowa. Please contact me if you would like to contribute to this database or if you note any problems with these pages.

Return to the Swedish Community Page