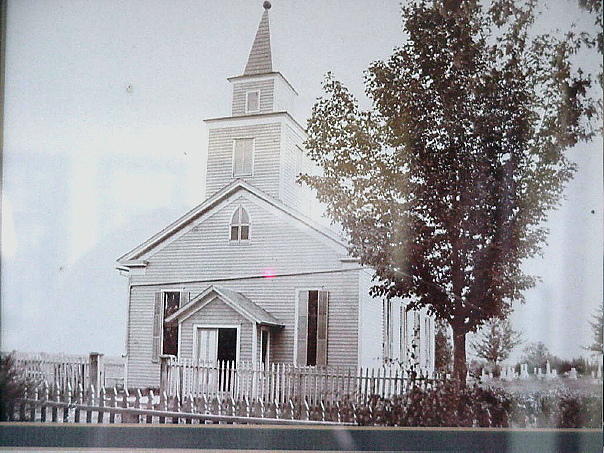 Photo provided by Lisa from her postcard collection

A New Church Is Built

In 1858 the congregation was large and prosperous enough to offer a pastor $200 a year with free house and fuel. When Rev. Hokan Olson and his family arrived in October the tiny parsonage proved very inadequate and the next year it was enlarged by two rooms. The log church had also become too small and at the January 21, 1860, church meeting it was decided to replace the log church with a new frame building. They selected Henri Jagle, described as an efficient and capable man, as architect and builder.

Men of the congregation started work in March and before long a 50 x 30 foot and 16 foot high church was erected on the northwest corner of the church yard. The members wanted a bell for the two tiered steeple and J. P. Anderson made that possible by lending them $150. He even went to St. Louis at his own expense to select the sweet toned Stuckstedt bell which, in fair weather, could be heard six to seven miles away. The church's exterior clapboard walls were painted white as were the wooden shutters at the tall windows.  The gabled roof had wooden shingles and a simplified classical cornice. There were two brick chimneys on either side at the rear and a small entry vestibule with double doors at the front. Interior walls were of plaster with dark, hardwood wainscoting. The same dark wood was used on the ceiling and from star-shaped walnut moldings hung two pierced metal light fixtures, each holding four oil lamps. The beautiful walnut front of the gallery stretched across the upper back of the church. It was reached by a typically Swedish steep and narrow staircase in one corner. Several handmade pews from the log church were used in the gallery, but the church proper was furnished with solid handsome pews of light and dark wood. The handmade pulpit, altar and hymn number board were painted white with touches of gold on the carving.  The altar communion rail and pastor's chair were also handmade. Two wood burning stoves heated the building. These were replaced by cast iron coal stoves when the wood supply near the church dwindled. Several dates are given for the dedication of the church. Emil Lund stated in his Historia, that Pastor Hasselquist said it was September 2, 1860. This may be correct as all references agree that he preached the dedicatory sermon, but other histories of the church give August 10, 1861, and the last of August, 1861, as the date.

Sometime before the building was finished John Levendahl asked if he could build a pipe organ in the gallery. This also was financed by J. P. Anderson. The small, all wooden, single manual organ with four stops and a pedal board cost the congregation $200. Just when it was finished is not recorded, but Oliver and Mary Helena Slephenson wrote on November 18, 1863. "We have installed an organ in our church. We are much pleased with it, because it reminds us of Sweden." This was the first pipe organ in the Augustana Synod.

The oldest New Sweden church minutes still extant show that on May 17, 1860, the congregation approved of Prof. Esbjorns departure from the theology school of the Northern Illinois Synod and approved the establishment of "their own school where the pure truth of the Bible may be taught." That summer the Swedish churches, of which New Sweden was the oldest, organized the Augustana Synod. Years later the official name was changed to the Evangelical Lutheran Augustana Synod of North America.

Sunday school was held from at least 1860 and a congregational summer school, usually called "Swede school," was started in 1860 and held from 1860 - 1868 and 1876 - 1883.  These summer sessions were primarily for the purpose of teaching children to read and write Swedish. However, on May 10, 1868, a committee was appointed to see that the congregation's children were instructed in both the English and Swedish languages. A lending library was established in the church in 1864 and continued as long as the church was used. As early as 1861 the parish was divided into four wards.

This page was created on 6-28-2001. This page may be copied and used for personal purposes but can not be republished nor used for commercial purposes without the author's written permission.
I am the County Coordinator and the Webmaster, the one who is responsible for the IAGenWeb project for Jefferson County, Iowa. Please contact me if you would like to contribute to this database or if you note any problems with these pages.

Return to the Swedish Community Page