Dexter Laundry Inc., the manufacturer of industrial laundry equipment, is celebrating its 125th anniversary this year.

"This is a once in a lifetime event," said Craig Kirchner, president of Dexter Laundry. "It's a big milestone. None of us will be around to see it again."

The details are still being sorted out, but Kirchner said a celebration is planned for Aug. 10 to thank the community for supporting Dexter and its employees.

Kirchner said the plant at 2211 W. Grimes Ave. will be open for guided tours "so people can see what goes on back there." Of course, no equipment will actually be operating, he said, but people will still be able to see how raw materials enter the building at one end, progress through various phases and come out as finished products at the other end.

Katie Six, Dexter Laundry's senior human resource administrator, told the Fairfield City Council that Dexter has not been open for public tours since the 1950s, so the opportunity is significant.

"We'll display all our products and even some heritage equipment built over the decades," said Kirchner. "We'll have food, music, carriage rides, stuff for the kids. It'll be fun. We hope the weather is perfect, and we have a great turnout."

The celebration also is expected to include a ribbon cutting at the new Dexter Laundry, a state-of-the-art self-service laundry, at the corner of Burlington Avenue and Fourth Street. The festivities there will include tours, demonstrations, and refreshments. Fairfield Mayor Ed Malloy is expected to be among the special guests.

Dexter got its start in 1894 in the tiny town of Dexter. In the late 1800s, William H. George organized the Excelsior Thresher Tooth Company to manufacture threshing machine accessories. As washing machines began to gain popularity, George saw an opportunity to improve the designs, and in 1894, he organized the Dexter Manufacturing Company to build Dexter washers.

An interesting note, Kirchner said, is that both the company and the city of Dexter got their names from Dexter, a champion racehorse known for speed and power. The horse was used as a model for weather vanes across the country and as the subject of a famous Currier & Ives painting featuring President Grant. Today, the Dexter logo still uses the Dexter horse icon to symbolize the continued dedication to high performance, unmatched strength, unrivaled endurance and loyalty to Dexter customers, said Kirchner.

The Dexter business grew quickly in size and prestige. When it outgrew its space in Dexter, George looked for a new location and new partners, and he found what he was looking for in Fairfield.

Fairfield was a rural town with a growing population and both an east-west and a north-south railroad for shipping and receiving goods and materials. A group of businessmen, led by L.O. Gains and R. Day Hunt, saw the company's potential and raised the $10,000 needed to purchase it. The purchase agreement was signed Aug. 10, 1911, ground was broke for a new plant, and Dexter moved to Fairfield in 1912.

The new factory was built to offer ideal working conditions, daylight and modern machinery, so that the workers could produce a superior line of washers. Every step in the fabrication of the washers, from the casting of gray iron to the finished product, was done on site.

"We still design, engineer and manufacture our products right here," said Kirchner. "We are true to Dexter. We don't take someone else's product and put our name on it, and we don't sell our product to someone else and let them put their name on it.

"Dexter is a premier brand and our name is known in the industry. We're proud Dexter washers and driers are made in the USA -- the competition's isn't. Our equipment is in 60 countries around the world, and those owners are proud and taut (sic - tout) the fact that it's made in the USA," he continued. "Quality comes first and people see the difference."

On Aug. 28, 1913, the management structure was solidified, the board of directors voted in, and the company's name became The Dexter Company.

The company continued growing and improving its washers until World War (sic - WWII). In May 1942, the U.S. Defense Authorities decreed the production of washing machines would stop because the steel was needed for military equipment. Dexter's final washer rolled down the manufacturing line one month later, and for the remainder of the war, the company focused on manufacturing defense equipment.

The company's success and growth continued, but it needed to finance that growth, so it made an agreement for the Philco Corporation of Philadelphia, Pennsylvania, to buy the company in 1954.

Two years later, Dexter introduced its first automatic washer and its first-every dryer. Then in the later 1950s, the company entered the coin laundry market with its first commercial washer.

In 1961, Philco was bought by the Ford Motor Company, and the company became known as Philco-Ford Corporation, but in 1969, Philco-Ford decided to sell the Fairfield facility. Everyone was concerned it might close because of a lack of a buyer, but a group of employees invested in it. The purchase was finalized in 1972, and, once again, the company name became The Dexter Company.

The new management team negotiated new labor contracts, invested in more efficient manufacturing processes and focused on opportunities to "wow" their customers. Because of the investors' and employees' hard work, the new company made a profit in its first year.

Dexter's foundry and laundry divisions carried each other. The foundry would do good one year, and the laundry would do good the next year. Just before 1994, both were so successful and growing that there was no longer room for both divisions in the original location, so a new building for the laundry division was built a few blocks west on Grimes Avenue.

Dexter Laundry continued its success at its new facility, and had to expand again in 1997 and again in 2016. Assembly lines were added, as were employees. Kirchner said Dexter's significant growth in the last few years enabled it to grow its workforce to more than 230 people.

"Building on the plant and hiring employees shows the community that we're investing to stay here; that we have enough confidence in the area to expand the plant, hire local and do what we can to support the community," said Kirchner.

In 2010, the foundry was sold, and became Revstone Castings Fairfield and then renamed Fairfield Castings. When the foundry went into foreclosure and was auctioned off in 2017, a group of Fairfield businessmen bought the business and reopened it as Faircast.

Just this year, DexterPay was introduced. The mobile app connects with Dexter vended machines to allow the user to pay for laundry their way.

"You don't need change or quarters so it is convenient for users," said Kirchner. "This was the talk of [The Clean Show] industry trade show for us."

As for the future, "the sky's the limit," said Kirchner, explaining that there are many opportunities in the vended laundry segment and the on-premise laundry, which is for long-term care facilities, hotels and other hospitality businesses.

What would W.H. George think of his Dexter Manufacturing Company now?

"Dexter wouldn't be here today if not for his vision and the other folks who saw an opportunity in front of them," said Kirchner. "Everyone since George has taken an opportunity and tried to wow the customer, and as long as we try to do that, we'll have an advantage over our competitors."

The photos below ran with the above story:

"This is a once in a lifetime event," said Craig Kirchner, president of Dexter Laundry. "It's a big milestone."

The day began with a ribbon-cutting ceremony at the new Dexter Laundry, a state-of-the-art self-service laundry.

Before cutting the Fairfield Area Chamber of Commerce Ambassadors' ribbon, Kirchner said Dexter had a laundry facility at the corner of West Burlington and Fourth Street for several years, and a decision was made to upgrade it.

Kirchner said not only is the new facility a nice place for community members to wash and dry their laundry -- "a daily necessity of life" -- but it also is a place where Dexter can bring its sales and maintenance team members to see how its washers and dryers are installed and how to get in to work on them.

Throughout the afternoon, free drying was offered to those using the facilities.

The 34th Army Band's Scrap Metal Band entertained visitors on the main stage, taking a break to let Kirchner and others give a welcome and snippets of information about the manufacturing company's history throughout the afternoon.

Kirchner told the crowd the celebration was in appreciation of the community's support of the business. He said multi-generations of families have worked at Dexter, and he is proud the community supports Dexter and that Dexter supports the community.

He also said he is proud to be able to say Dexter's washers and dryers are made in the USA, in the heart of America, in Fairfield, Iowa.

One of the highlights of the afternoon were the guided tours through the factory because Dexter had not offered public tours since the 1950s.

Visitors were able to take the mile-long walk from the west end of the building, where raw materials enter, to the east end where finished products are shipped out. The tour guides explained the processes and the machines that are used to do the work. Examples of Dexter's products, from old wooden tub washers to today's machines, were displayed at the end of the tour.

In addition to the factory tours, visitors also could take a wagon ride, play a bean bag toss game, have their children's faces painted, enjoy hot dogs and more. They also were able to sign up for door prizes and share their Dexter memories.

Dexter got its start in 1894 in the tiny town of Dexter. It was organized by William H. George to build Dexter washers.

The company and the town both got their names from a champion race horse named Dexter that was known for speed and power. Today's Dexter logo still uses the Dexter horse icon to symbolize continued dedication to high performance, unmatched strength, unrivaled endurance and loyalty to Dexter customers.

As the company outgrew its space in Dexter, George found what he was looking for in Fairfield: a rural town with a growing population and a town with both an east-west and a north-south railroad for shipping and receiving goods and materials.

A group of Fairfield businessmen bought the company. Ground was broken for a new plant in 1911, and Dexter moved to Fairfield in 1912.

The new facility was built in the mid 1990s, just a few blocks west of the original site. The new building has since been expanded twice. 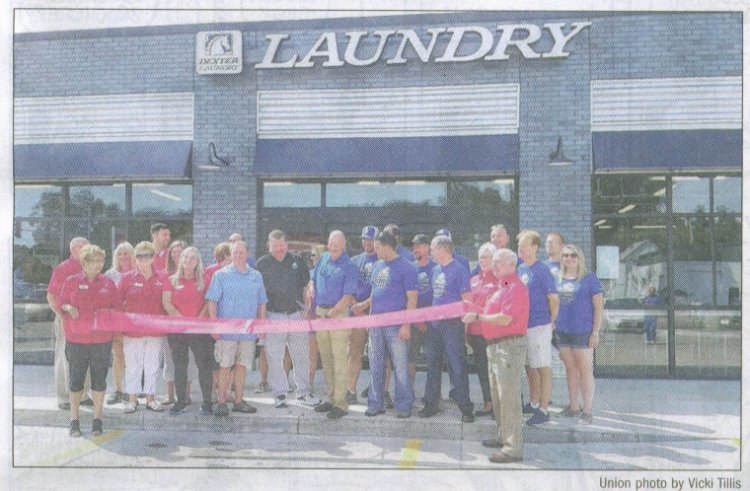 Dexter Laundry president Craig Kirchner, center, cuts the ribbon Saturday, Aug. 10, for the new
Dexter Laundry, a state-of-the-art self-service laundry at West Burlington and Fourth Street in Fairfield.
Kirchner is surrounded by representatives from Dexter and the Fairfield Area Chamber of Commerce Ambassadors.

This page was created on 18 August 2019 and is copyrighted. Articles reproduced with permission from The Fairfield Ledger. The page may be copied and used for personal purposes but can not be republished nor used for commercial purposes without the author's written permission.