There isn't a lot of information available on the Upper Richwoods Church, but the outline here was found in the Fairfield Library. Who wrote it and when isn't known. The church photo was contributed by Jane Worley Knapp.

The first church in Buchanan Township, Jefferson Co., Iowa was a log struture built in Richwoods, Iowa in 1842. In 1860 Wesley J. Green, Wiley Jones, and Jacob Garmoe were appointed trustees and built a new church. It was named Upper Richwood Methodist Church.

In 1865 Rev. John Orr was the minister, John Elliott joined the church and went to Iowa Wesleyan University where he was licensed to preach. In 1868 he was appointed Junior Preacher with the Rev. David Donaldson the preacher in charge.

In 1872 Rev. S.H. Thomas administered last rites to both Rev. Elliott and Mrs. Elliott. They died five days apart, and are both buried in the Richwood Cemetery. Mrs. Elliott was Charlie Green's sister.

The church was closed in 1929 as attendance was so low. In October 24, 1932 the building was sold to Ed Hendricks for $65.00, and the land went back to Wm. Allander and Frank Masden as they owned the land then.

Some of the ministers of the church were; Thomas Pool, Apful, Carson, Iraland, Frank Seeds, Gardner, and Butler.

The volunteers of the Civil War drilled on the church grounds before they left for the war. 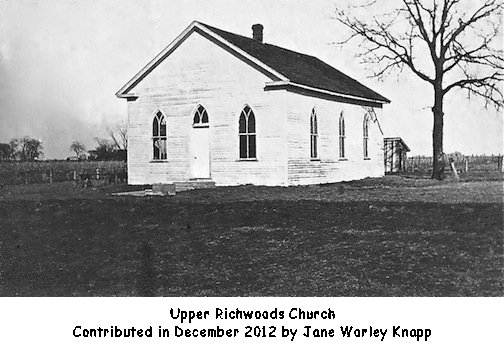 This page was created on 17 December 2012 and is copyrighted. This page and/or its linked data may be copied and used for personal purposes but can not be republished nor used for commercial purposes without the author's written permission.
I am the County Coordinator and the Webmaster, the one who is responsible for the IAGenWeb project for Jefferson County, Iowa. Please contact me if you would like to contribute to this database or if you note any problems with these pages.

Return to the Churches Index Page