Location: Cedar Township, section 36. On the Stockport Road south of Cedar Creek bridge, notice boulder on the west side of the road. Continue south from there to the fence line, walk across the ditch and turn right. (see township map.)

Condition: One stone surrounded by a white fence with no way to trim the brush inside the fence.

This lone marked burial site is for Jacob Wiley, who was believed to have fought in the Revolutionary War. The roadside boulder referred to above was erected in 1929 by the local chapter of the D.A.R. to mark a spot 35 rods east of his burial. Although not proven, as many as 12 more people may be buried in this same area, one of whom was Jacob's wife Jane; Jacob's grave is the only one that was marked. Local genealogist, the late Mary Prill, writes in "Revolutionary Soldiers Buried in Iowa" in October, 1968, "Jacob Wiley was buried on a little ridge just south of Cedar Creek, west of the Stockport road, near the point where Hall's Mill then stood. We walk through the field to stand at the spot. Thirteen pioneers lie buried here, but only the grave of Jacob Wiley is marked, and his white marble gravestone was not erected until years after his death." Some of the information on this page comes from records that are on microfilm at the Fairfield Library. 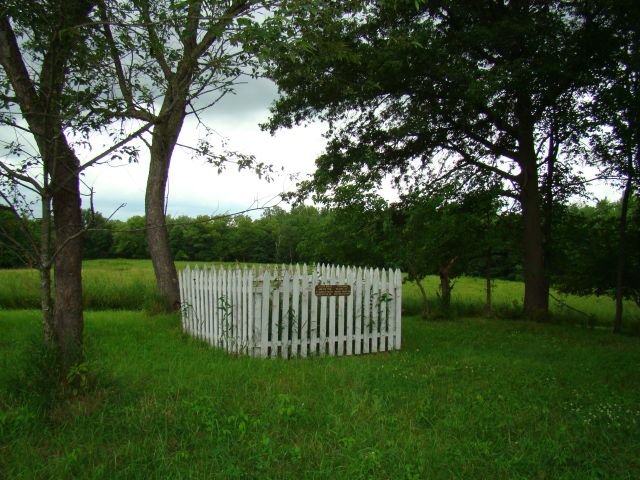 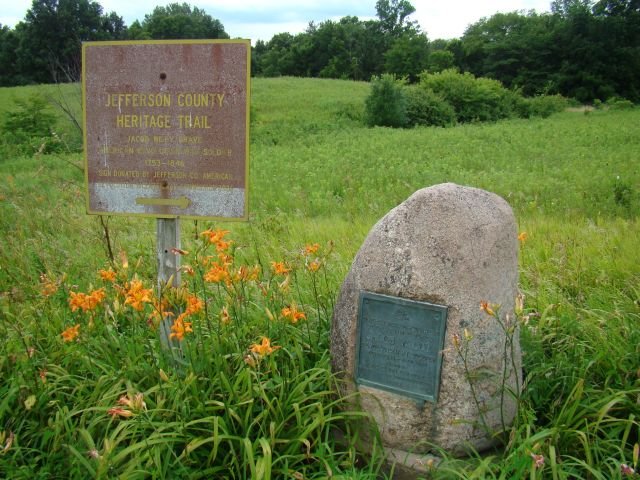 "Fairfield Ia. Ledger", Monday, May 27, 1957, Page 9
Shown above is the marker locating the grave of the only known veteran of the Revolutionary War buried in Jefferson county. He was Jacob Wiley, born 1753 and died in 1846. The marker, erected in 1929 by the Fairfield DAR, is located south and east of Cedar creek about 11 miles Southeast of Fairfield. The marker is on the west side of the graveled road but the actual grave is some distance away. The plaque states, "On the ridge 35 rods west of this point is buried Jacob Wiley, Revolutionary soldier, Born 1763--Died 1846. The land on which the grave is located is owned by Mrs. Roy Hix, Fairfield, and is farmed by Wayne Keller who lives nearby. The actual grave is surrounded by a picket fence and the enclosure is grown over with weeds and brush.-- LEDGER PHOTO.
~~***~~ 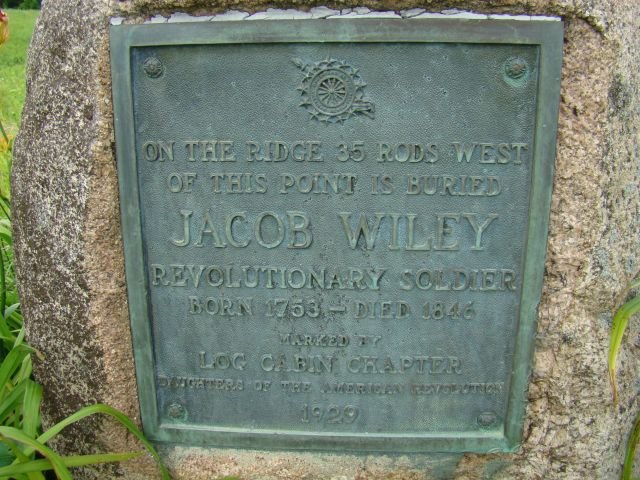 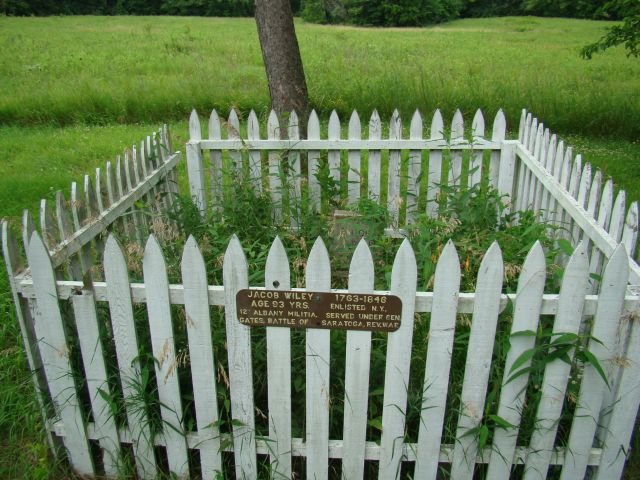 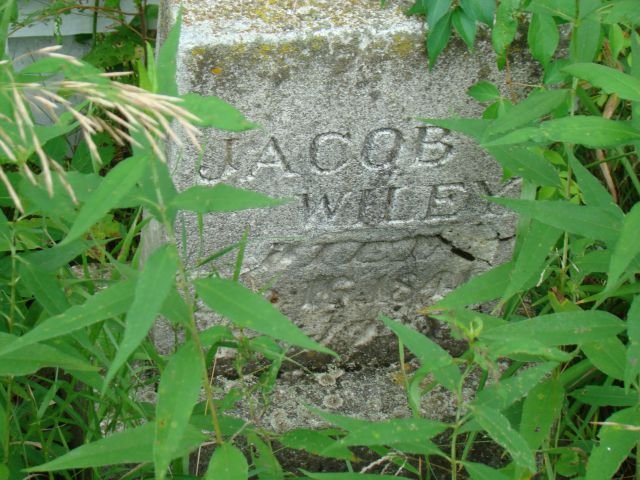 Personally appeared before me, one of the justices of the peace in and for the County of Jefferson & Territory of Iowa, Jacob Wiley, and after being duly sworn deposeth and saith that he enlisted under Captain Alies Steenborreh or Steenbergin at Shylers Mills, Stillwater County, State of New York, about one year before the takeing of Burgoin and was under General Gates in the Battle at Saritoga. He was enlisted for a term of three years after the battle in which Burgoin was taken. The detachment to which he Belonged was ordered on to meet Cornwallace but when the(y) arived at Albany, State of New York, he was taken Lame with a defect in his foot and their receved his regular discharge. He shortly after removed to West Pensylvania where he remained about three years, from thence he moved to Green River, Kentucky, and their resided about twenty or twenty one years, near Lewisburgh, from thence he removed to Galleton County, Illinois and there resided until about three years past, from thence he removed to Black hawk purchase, now Territory of Iowa, where he now lives. He says that he has no Education neither could he meet with any person that could give him any encoragement with respect to receving any thing for his services in the war. He become far advanced in years and much discouraged being poor and destitute of allmost the necessary support to sustain life. He suffered his discharge with all his other Papers to be burned. He also says his first Captain was drumd out of the Ranks for Cowardice, that he knows of no person now living by whom he could prove his enlistment. Wm. Drake enlisted at the same time. Where he now is or whether he is liveing or ded he cannot tell and further the deponent saith not.

Sworn and subscribed to this 25th day of November 1839.

John Ankrom
Justice of the Peace.

We have come upon two possible answers to your query about Jacob Wiley. The roster of Van Schoonhoven's 12th Albany militia regiment, representing the Ballston-Half Moon district, including that village in the town of Saratoga called Schuylerville, where Phillip Schuyler had his home and mills, and where Jacob Wiley claimed to have enlisted, contains the names of Captain Elias Steenbergh and enlisted man Jacob Wilsee (no one named Drake). Given the casual spelling of the day, the similarity of names and the identity of place seems significant. However, the three-year term of enlistment as well as the dispatch after Cornwallis argues against militia service.

It is possible that Wiley, like many others, served in the militia and later in the Continental service. However, New York militia records are very imperfect for the period before 1778, when the new state government began to function smoothly, and in the absence of fuller records and especially of any kind of biographical information, we cannot confirm or deny.

"In the Name of God, Amen. I, Jacob Wiley of Iowa Territory in the County of Jefferson, Yeoman, being mindfull of my mortality, do this twenty-first day of September in the Year of our Lord one thousand eight hundred and forty, make and publish this my last will and testament in manner following.

"First desire to be buryed Decently.

"Also I give and bequeath unto my eldest son Stephen Wiley the sum of one dollar.

"Also I give and bequeath unto my second son, Eli Wiley, the sum of one dollar.

"Also I give and bequeath unto the heirs of my eldest daughter Mary Holmes the sum of one dollar.

"Also I give and bequeath unto my second daughter Elizabeth Davis the sum of one dollar.

"Also I give and bequeath unto my third daughter, Lydia, her lawful heir, the sum of one dollar.

"Also I give and bequeath unto my fourth daughter, Jane Dunn, the sum of one dollar.

"Also I give and bequeath unto my fifth daughter, Hannah Dunn, the sum of one dollar.

"Also I give and bequeath unto my Sixth daughter, Delila Combs, the sum of one dollar.

"To be paid to them respectively so soon as one year shall be expired after my decease.

"Also I give and bequeath unto my granddaughter, Mary Jane, child of my daughter Delila Combs, the land on which I reside, being the North East Quarter of the South East quarter of Section Thirty-four in Township No. Seventy-one North of Range Nine West, containing forty acres.

"Also I give unto my wife Jane Wiley during her life the use of all my plate and household goods, bedsteads, beding, and other furniture, with my stock of cattle, hogs, & Sheep, with the crop of corn now standing to be disposed of for her support and after her decease if there should be any left to remain my Grand-daughter Mary Jane Combs.

"All the rest and residue of my personal estate whatsoever and wheresoever, of what nature and quality, Soever the same may be and not hereinbefore mentioned and disposed of after paying my debts, Legacies and funeral expenses, I do give and bequeath unto my wife Jane Wiley and her executors, administrators and assigns to and for her and their own use and benefit absolutely and I do hereby constitute and appoint Samuel Combs to be executor of this my last will and testament. In witness whereof I have hereunto set my hand and seal the day and year above written.

This page was created on 3-3-2003 and updated 27 Feb 2011. This page may be copied and used for personal purposes but can not be republished nor used for commercial purposes without the author's written permission.
I am the County Coordinator and the Webmaster, the one who is responsible for the IAGenWeb project for Jefferson County, Iowa. Please contact me if you would like to contribute to this database or if you note any problems with these pages.