The Fairfield Abbey was a mausoleum that was built by The Iowa Mausoleum Company of Waterloo, Iowa, and formerly stood in the Evergreen Cemetery in Fairfield. It was erected between 1913 and 1915 and stood for more than 50 years until structural problems forced the discontinuation of its use. The remains of the people interred there were removed by 1968, either by Raymond Funeral Home or other local funeral homes, and re-interred. Many were re-buried in Evergreen Cemetery at the request of the families of the deceased. Eight were moved to other cemeteries. Those without local family ties, or whose remains were unclaimed by relatives, were ordered removed by the District Court of Fairfield, and were re-buried in a long line of graves at Evergreen Cemetery. The articles below give an interesting look into what must have been an impressive local edifice.

This article is taken from the January, 1925, files of "The Fairfield Ledger" --

23 BODIES NOW IN THE ABBEY
F. D. KERRICK, Last to be Placed There, Was The Man Who Inspired The Building.

When the body of Frank D. KERRICK, Fairfield undertaker, was laid in one of the crypts in the Fairfield Abbey last Thursday, the total number of bodies in the mausoleum was brought up to 23. Mr. KERICK (sic) was the man chiefly responsible for the erection of the Abbey.

In 1913 Mr. and Mrs. KERRICK attended a convention of undertakers in New Orleans. In New Orleans it is now, and was then, against the law to bury people in the earth, and consequently, the cemeteries there contain mausoleums of all kinds and sizes. Mr. and Mrs. KERRICK inspected many of these burial places and were greatly impressed by the idea of burial above ground. They decided that they would try to have a mausoleum erected in Fairfield.

Start the Project.
When the KERRICKs returned home, they had representatives of different mausoleum companies come to Fairflield (sic) to discuss erecting a burial building here. The Iowa Mausoleum Co. of Waterloo undertook the job, and Perry KING of Fairfield, Mrs. KERRICK's father, and a representative of the company sold crypts with the condition that one-third of the purchase price should be paid when the foundation for the building was in, one-third when the roof was on the building, and the balance when the building was completed. About 90 crypts were sold at $150 each and work was begun.

Things progressed nicely until the roof of the building was on. Then the Iowa Mausoleum Company became bankrupt, went into the receiver's hands, and the Fairfield Abbey was sold at sheriff's sale to settle the claims against it.

Fred W. McCLAIN of Fairfield bought the uncompleted building. Then J. L. ROSE, a man representing a Kansas mausoleum company got possession of it, completed it and took as pay the unsold crypts. A short time after the building was completed, in the spring of 1915, Israel JUNE, who had been sexton of Evergreen Cemetery for several decades, died and was the first person to be put in the new building.

Form Corporation.
Soon after this, those people who owned crypts in the mausoleum formed themselves into a corporation which they called the Fairfield Abbey Association. Thomas DAVIES was the first president of this association. Mr. KERRICK was vice-president and A. S. McPHERSON secretary and treasurer. The association which was incorporated for 50 years has active charge of the Abbey at the present time. Dr. M. C. CARPENTER of Fairfield is the president, Mr. KERRICK was secretary and treasurer.

The Abbey is located in the northeast part of the city. It is a stone block one-story structure, about 30 by 90 feet in size. In it there are 219 crypts or vaults. The entrance to the building is in the middle of the south side. On either hand just inside the double entrance doors, there are four crypts which are lengthwise with the wall. On a little way in front of the entrance is a stone pulpit, and behind and on either side of this pulpit there is a small room containing eight crypts, four on each side running lengthwise with the room. In the back of each room there is a small stained glass window. Entrance to the rooms is gained through little brass gates. Running the entire length of the building down the middle there is a wide corridor. At each end of this corridor there is a large stained glass window. Vaults are arranged in rows four tiers high on both sides of this corridor. The whole interior of the building is finished with white marble. In front of the rows of vaults, which are endwise with the wall, there are greenish-white marble ledges, or shelves, for flowers. The floor is tiled.

When Mr. ROSE had finished the building, he gave the Abbey Association an endowment fund of $500 for the upkeep of the building. This fund has been added to from time to time until at present the fund amounts to $2,800. 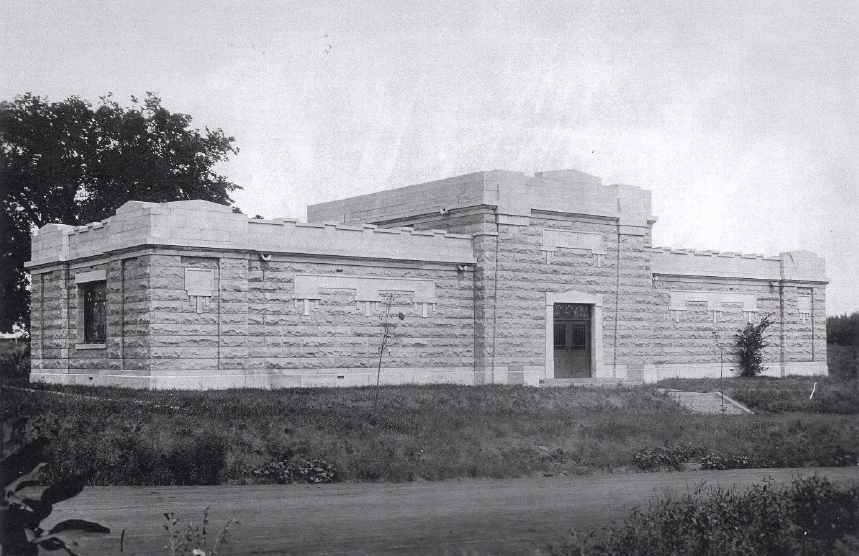 Exterior of the Abbey

Map of the Abbey

Now defunct Fairfield Abbey known for history, beauty
Editor's note: The following story is rewritten from an article published in the 1939 Fairfield Ledger Centennial edition and a July 26, 1975, Ledger article.

One of the most interesting buildings in city history is the Fairfield Abbey, yet few residents know the story behind it.

In 1913 the late Frank D. KERRICK, with his wife, attended a convention of morticians in New Orleans. In that city it was then against the law to bury people in the earth, and consequently the cemeteries contain mausoleums of all kinds and sizes.

Mr. and Mrs. KERRICK were greatly impressed by the beauty of many of these mausoleums and upon returning home, set about to see that one was erected locally.

The Iowa Mausoleum Co. of Waterloo undertook the job and Perry KING of Fairfield, along with a representative of the company, sold crypts. About 90 crypts were sold at $150 each and work begun.

Work progressed smoothly until after the roof of the building was on, when the Iowa Mausoleum Co. went bankrupt, went into the receivers hands, and the Fairfield Abbey was sold at a sheriff's sale to settle the claims against it.

Fred W. McCLAIN bought the uncompleted building, which he sold to J.L. ROSE, representing a Kansas mausoleum company. A short time after the building was completed, in the spring of 1915, Israel JUNE, who had been a sexton of Evergreen Cemetery for several decades, died and was the first person to be placed in the new building.

Soon after this the people who owned crypts in the mausoleum formed themselves into a corporation which they called the Fairfield Abbey Association, having active charge of the abbey for 50 years.

Structurally, the abbey was of stone-block, one story high and about 30-by-90 feet in size. In it were 219 crypts or vaults. The entrance in the center of the southside was flanked by four crypts.

Vaults were arranged in rows four tiers high on both sides of the central corridor. The whole interior of the building was finished with white marble and the floor was tiled.

Problems involving the decaying building began in 1961 when stone facing on the structure collapsed. Vandals then began making shambles of the interior. Remaining bodies were removed under court order and reinterred in Evergreen Cemetery.

The mausoleum was torn down in July 1975 from its location at the east end of Kirkwood Avenue. The building had been razed in 1971 but the contractor, McLaughlin Construction Co., was unable to do the job until four years later. The property later became a part of Evergreen Cemetery.

RECOLLECTIONS
by the Jack RAYMONDs

The Fairfield Abbey Mausoleum was operated by an association of owners. F. D. KERRICK, local undertaker before his death in 1925 was very active in the association.

There were a total of 219 crypts. Two rooms had 8 units each. These were the private family rooms of the STEVER and VAN NOSTRAND families. Caskets were placed lengthway into the crypt, 4 units high. In the great hall burials were lengthway into drawers. The walls and ceiling were solid white marble panels with terrazo floor

Approximately 91 or 92 were entombed in the Mausoleum. Raymonds transferred 77 for reburial, including 43 which were unclaimed by relatives and Raymonds were ordered by District Court to complete final removal.

The following are those moved by Raymond's for the families:
Moved into lots in Evergreen

The following were unclaimed by relatives and were transferred from Fairfield Mausoleum to Evergreen Cemetery by order of the District Court, Fairfield, Iowa. Final removal was made August 1, 1968, by the Raymond Funeral Home.

Not included are others removed by area funeral homes. 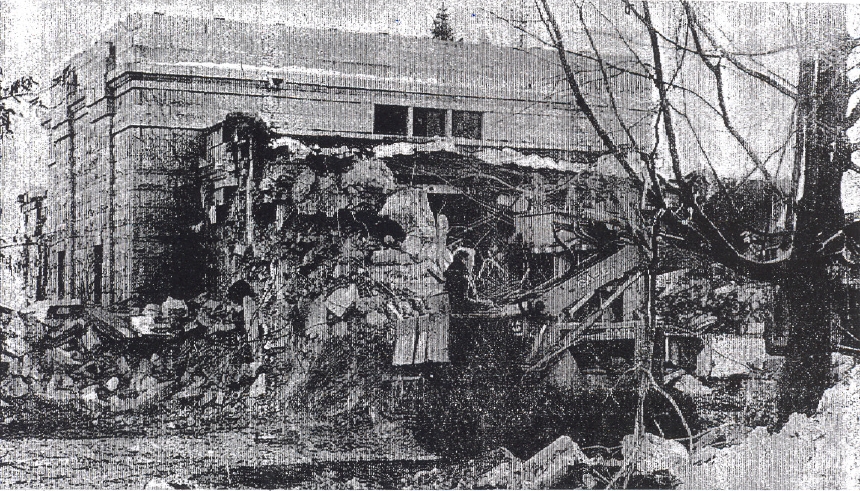 LOCAL LANDMARK -- Built in 1915, heavy concrete and limestone walls of the Fairfield Abbey are giving way to a demolition crew. Work is being done by Ralph Hackert, Richland. Building, which had been deteriorating for the past 10 years, contained 219 burial crypts. Last bodies were removed in 1968. --Ledger photo.


Fairfield Abbey Is Coming Down After 56 Years

Demolition work has begun on the Fairfield Abbey, a landmark for more than 50 years and a source of numerous problems.

The building, which has been deteriorating for more than 10 years, is being razed by Ralph Hackert of Richland. Eventually, the site will become an addition to the Fairfield Evergreen Cemetery.

The Fairfield Abbey Association was organized in 1913 by the late Frank D. KERRICK, a local undertaker. The mausoleum, measuring 30 by 90 feet, was constructed in 1915.

The building contained 219 burial crypts. Approximately 100 of them were occupied when part of the north wall collapsed in 1961.

The building was constructed of tile blocks and concrete with a facing of Indiana limestone. Moisture seeping into the walls from faulty roof drains caused the heavy limestone blocks to give way.

Charles Eastburn, Fairfield has served as court-appointed trustee of the Abbey Association since 1961. His problems have been many, including the legal work involved in the removal of bodies.

The building was further damaged by vandals who broke the stained glass windows and pried off marble veneer from the burial crypts.

The last 34 bodies were removed in 1968 by action of district court and re-interred in Evergreen Cemetery.

Burial plots were provided by the Cemetery and it was agreed that the land would revert to the Cemetery Association after the building had been razed and the footings removed. 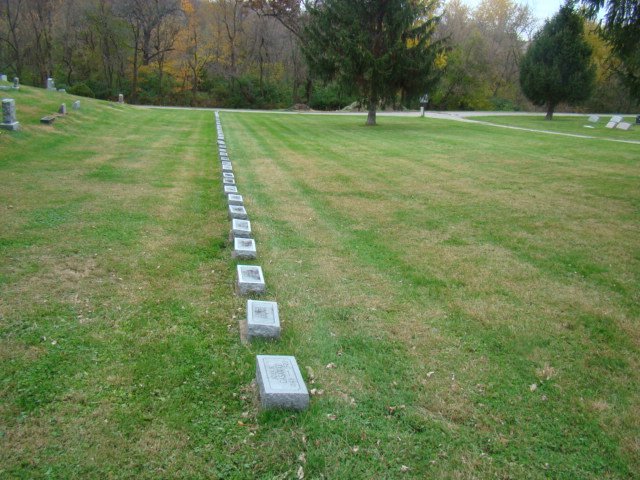 The line of unclaimed people from the Abbey who were re-interred at Evergreen. Photo by Richard Thompson, 2009.
This page was created on 11/28/2009. This page may be copied and used for personal purposes but can not be republished nor used for commercial purposes without the author's written permission.
I am the County Coordinator and the Webmaster, the one who is responsible for the IAGenWeb project for Jefferson County, Iowa. Please contact me if you would like to contribute to this database or if you note any problems with these pages.