The Jefferson County Home for the Poor and Insane was started sometime in the 1870s; we have not been able to pinpoint a particular year. This page is a listing of the known burials on the facility's grounds, based on death records 1880-1930 found at the County Courthouse, and there are more whose identity is not known. Unfortunately there are no gravestones to mark the burials, the last of which were probably made before 1930. Some of those buried here will be found in the State Census records of Liberty township in 1885 and 1895. The 1885 census listed 33 persons here, and the 1895 listed 36 persons.

The County Farm consisted of 140 acres of land, about 100 of which was suitable for growing crops. The farm had every able-bodied person busy at an appointed task, whether it was working in the kitchen, doing daily housekeeping, or working in the barns and fields. The men tended the huge garden, planting and harvesting the crops, and took care of the animals. For about 100 years this was a nice self-supporting facility. In 1970 the government changed the rules regarding the residents. The barns and all outbuildings were demolished, the orchard was bulldozed, the animals were sold off, and the cropland was rented out through a bidding process to an area farmer. For 2011, the 106 crop acres were rented at $183/acre. A new one-story residential facility was built in 1977, and under the new rules NO WORK was to be done by the residents, only by hired help. The County Home was closed about 2000. Since then it has been sold to a local farmer who uses the facility for a small office and storage for farm supplies. Grain storage bins have also been built on the property.

Below the listing is a photo of the original main house prior to its 1977/1978 demolition. 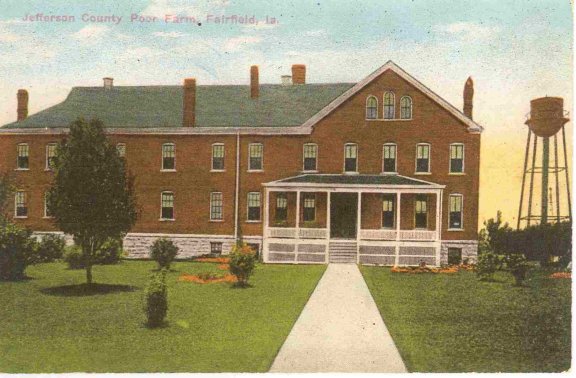 This page was created on 11-26-2010 and is copyrighted. This page may be copied and used for personal purposes but can not be republished nor used for commercial purposes without the author's written permission.
I am the County Coordinator and the Webmaster, the one who is responsible for the IAGenWeb project for Jefferson County, Iowa. Please contact me if you would like to contribute to this database or if you note any problems with these pages.