The following is a chapter from "The History of Jefferson County, Iowa - A Record of Settlement, Organization, Progress and Achievement", Volume 1, Pages 11-12, published by the S. J. Clarke Publishing Company of Chicago in 1912 (in 1914 according to some citations).
~~~oooOOOooo~~~
HISTORY OF
JEFFERSON COUNTY, IOWA
CHAPTER IV
THE TERRITORY OF IOWA

The Blackhawk war, an event of 1832, ended in the disastrous and complete defeat of the Indians. The direct result was that the Indians were required to cede to the United States a strip of country extending about one hundred and eighty miles in length from the boundary of Missouri north along the west side of the Mississippi River, with an average width of fifty miles. On the first day of June, 1833, it was opened to settlement. This cession was termed the Blackhawk Purchase.

The presence of considerable population and the absence of lawful authority were sharply brought to the attention of Congress by a murder committed in May, 1834, at Dubuque. One Patrick O'Connor, a miner, apparently without provocation and without cause, shot and killed George O'Keaf, another miner. It was found no court had jurisdiction. The people of Dubuque then acted for themselves. O'Connor was tried in legal form with counsel and jury and was convicted. At the appointed time he was hanged.

Such administration of justice was too uncertain and too liable to abuse. Congress acted with promptitude and in June of the same year for governmental purposes attached the region between the State of Missouri on the south and the boundary of the United States on the north, and between the Mississippi River on the east and the Missouri River and the White Earth River on the west to the Territory of Michigan.

This district the Legislative Council of Michigan at a special session organized as two counties and two townships. The division was made by a line running due west from the lower end of Rock Island. The northern county was named Dubuque, the township, Julien; the southern county was named Demoine, the township, Flint Hill. County courts were provided for them. The existing law was extended over them. For judicial purposes they were joined with a county already organized and bearing the name "Iowa." Owing to this association they came usually to be referred to as the Iowa District.

In 1836, the Territory of Michigan was divided. The western part was established as the Territory of Wisconsin. General Henry Dodge, an officer of the regular army, was appointed its governor. He designated Belmont as the temporary capital.

The Territorial Legislature convened in October. One of its acts was to divide Demoine County and establish the additional counties of Lee, Van Buren, Henry, Louisa, Musquitine and Cook. Henry County lay between Demoine County on the east and the Indian country on the west. Why the name "Henry" was given it has become a matter of conjecture. The most probable supposition is that it was to honor, not Gov. Henry Dodge as is frequently stated, but Gen. James Dougherty Henry, who was a prominent figure in the Blackhawk war.

Owing to the poor communications at Belmont and the discomforts of the lawmakers, another act of this Legislature temporarily removed the seat of government to Burlington, Demoine County. The political effect of its passage was unforseen. At once it set in motion new activities which led to important consequences.

When it was learned in the Iowa District that Burlington was for a time to be the capital of the Territory of Wisconsin, it aroused and stimulated the interest of the settlers in public affairs. There began a serious agitation for the establishment of a territory west of the Mississippi. The distinction and prestige it would give were quickly and fully recognized. To develop and strengthen the popular sentiment for it, public meetings were held in the several counties. Washington, Jefferson and Iowa were names suggested and considered for the proposed territory. A delegate convention of citizens was called to meet at Burlington on the sixth of November, 1837, to give formal expression to their views on the subject. This was the date set for the assembling of the Legislature and was selected no doubt for the purpose of influencing the members of that body.

Both bodies met at the appointed time; and both adopted a memorial to Congress, praying for the organization of a separate territory to bear the name of Iowa.

A census taken in May, 1838, gave the Iowa District a population of 21,859 souls, indicating a rapid growth, and a necessity for a local government.

In response to the memorial, a bill to divide the Territory of Wisconsin and to establish the territorial government of Iowa was introduced in Congress. There was some opposition to the proposal. The advocates of slavery and especially John C. Calhoun, a senator from South Carolina, were antagonistic. The friends of the measure urged that the settlers themselves were largely from the south and would not be hostile to the Southern institution. While Calhoun admitted this might be true for the moment, he was not misled as to the ultimate consequences and continued his opposition. Fortunately, George W. Jones, the territorial representative, was a man of tact and influence, and taking advantage of an opportune absence of Calhoun, secured the passage of the act. On the twelfth day of June, 1838, it was approved by President Van Buren and on the fourth day of July following took effect.

The Territory of Iowa was born. 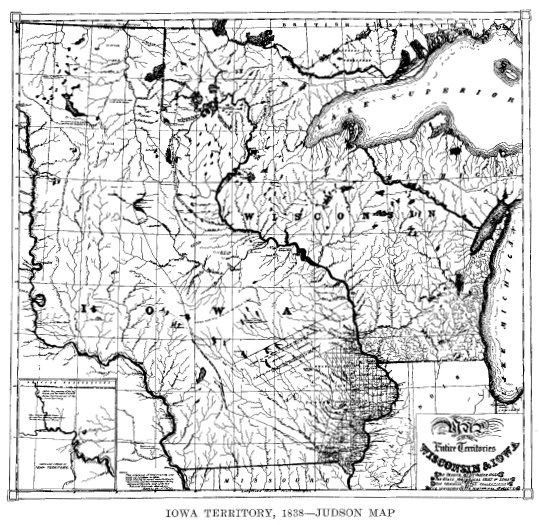 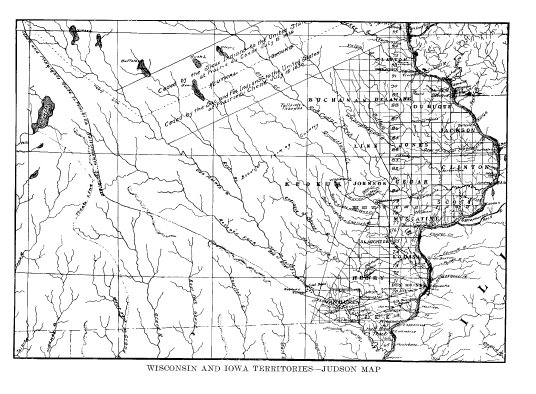 This page was created on 16 August 2015 and is copyrighted. This page may be copied and used for personal purposes but can not be republished nor used for commercial purposes without the author's written permission.
I am the County Coordinator and the Webmaster, the one who is responsible for the IAGenWeb project for Jefferson County, Iowa. Please contact me if you would like to contribute to this database or if you note any problems with these pages.