The following is a chapter from "The History of Jefferson County, Iowa - A Record of Settlement, Organization, Progress and Achievement", Volume 1, Pages 181-183, published by the S. J. Clarke Publishing Company of Chicago in 1912 (in 1914 according to some citations).
~~~oooOOOooo~~~
HISTORY OF
JEFFERSON COUNTY, IOWA
CHAPTER XXIV
THE SEAT OF JUSTICE

Samuel Hutton was born in 1785 near Pittsburg, Pennsylvania. By the migration of his parents to Tennessee in his boyhood days he grew up a citizen of that state. He was a soldier of the War of 1812. A land-warrant issued him for this service lured him to take his family in 1821 to Sangamon County, Illinois, where he remained some fourteen years. In 1835, he moved to Demoine County, Michigan Territory. One of the first comers in the locality, by reason of his four years' residence he had grown familiar with the country and its people. To the citizens of this new county he was well known. He was a frequent visitor among them and was in fact one of their spiritual advisors. As a licensed minister of the Baptist Church he had conducted religious services in many of their homes. He died on September 12, 1857, at Mount Pleasant.

Joshua Owen, for so he wrote the name, came in 1835 to Michigan Territory from Alabama. The place of his birth has not been determined. He was the first sheriff of Lee County. In 1838, he was elected its assessor, and in 1839, was chosen to represent it in the House of the Second Territorial Legislature of Iowa. He brought with him or acquired considerable means, which he invested in lands. In a deed dated January 9, 1857, the som of $5,800.00 is given as the consideration for the conveyance of his home farm. About this time he removed to California where he spent his later years.

Roger N. Crissup traced descent directly from the famous Michael Cresap accused of the treacherous massacre of the family of Logan the great Mingo chief. He was educated as a physician at Louisville, Kentucky. In 1833, he located at Bonaparte and engaged in the practice of medicine. His profession necessarily made him and the horse on which he made his calls familiar figures in all the country about. He lived to a ripe old age.

These were the commissioners. Pursuant to enactment they met in the town of Lockridge on Monday, March 4, 1839, "to proceed to the duties required of them."

The details of their proceedings are missing and must be filled in by conjecture. The main features present no particular difficulty. Some justice of the peace, perhaps Rhodham Bonnifield, administered the necessary oath of qualification. Their first inquiry would be for the centre of the county and for the available sites for a town in its neighborhood. In a matter of so much local importance there would be a lively interest. Especially among the settlers about Lockridge would it be a theme of general discussion. It is reasonably certain a number of them were present prapared to furnish information, make suggestions and offer advice. It is quite probable that among them were the candidates for the offices to be filled at the April election and on account of their official positions W. G. Coop, John A. Pitzer, Henry B. Notson and Frederick F. Lyon.

It has been charged that Coop's activity in the establishment of the county was to profit by the location of the seat of justice at the town he had helped to lay out. This seems to be a gratuitous insinuation, for no evidence to support it is offered. The facts point in the opposite direction. It is not uncommon in any age to accuse public officers of acting for selfish purposes when they really have at heart only the general good. The conditions of the law -- and these were in the original draft of the bill, not insertions -- made the selection of Lockridge an impossibility. The commissioners were sworn faithfully and impartially to examine the situation of the county, taking into consideration its future as well as its present population, to pay strict regard to its geographical center and to locate the seat of justice as near it as an eligible sight (sic - site) could be obtained. There is no occasion to question the purity of Coop's motives.

The interior of the county, where this location was required to be made, was unsurveyed. Its geographical center was north of west about seven miles distant from Lockridge as the crow flies. The northwest corner of township number seventy-one north range nine west -- Cedar -- which had been fixed in 1837 by Surveyor Hervey Parke, was the point from which it could most easily and conveniently be determined as from that it was due north just three miles.

It would be interesting to trace, if that were possible, the route of the commissioners as they made their examination. That they travelled on horseback may be confidently asserted, for in those days that was the common manner of travelling. Who went with them as guide and as spectators? Was there snow on the ground? Did inclement weather delay them? Curiosity on these points now bears no fruit. Their choice finally was a bit of rolling prairie bordered on the north and east by a small creek and fringed with timber, situated one and one-half miles south and one-half mile west of the exact center of the county. Lines were run showing the site selected to be on the southwest quarter of section twenty-five in township seventy-two north range ten west. They marked the place it may be assumed, in the manner employed by the commissioners of the County of Linn, who state in their report it was "by driving a stake to be considered the center of said location." The surveyor is not known. Joseph Parker and George W. Troy carried the chain "one day" and received $1.50 each for their service.

The night following the decision, according to an old settler's tale, the commissioners put up at Rhodham Bonnifield's eight miles to the east. The house now stands in Old Settlers' Park. It yet remained for them to select an appropriate name for the new town. This duty became the subject of discussion. They may not have known that "Paynesville" had been inserted in the original bill and later struck out by amendment and "Randolph" substituted. These names were to honor Jesse D. Payne and John H. Randolph, both prominent men in Henry County. 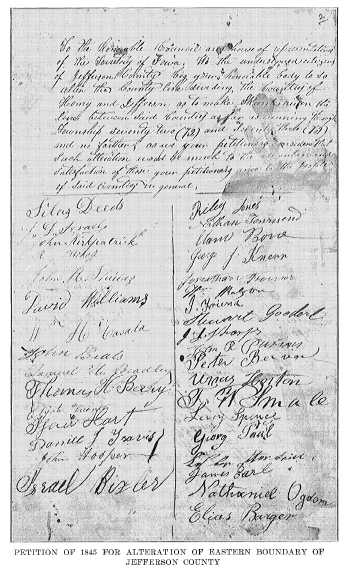 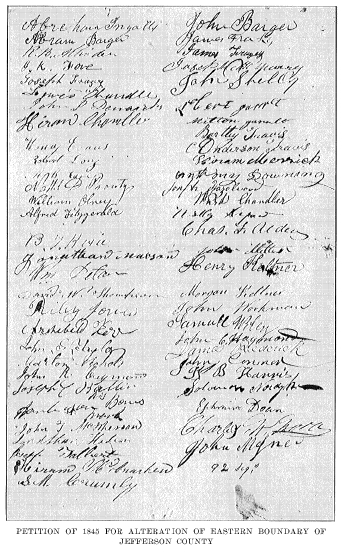 Perhaps they mean that these men were influential in the election of Coop and in the establishment of the county. It is fortunate that an incidental result of the veto of that bill by Governor Lucas was the nullification of this action as it was not renewed in the subsequent act. As the story runs it was Mrs. Bonnifield, who, appealed to in the conversation, suggested "Fairfield," a suggestion which met with instant aproval and adoption.

It is to be presumed that in compliance with their oath the commissioners committed a report of their action to writing, signed and duly filed it as directed with the clerk of the district court of Henry County. If so, that official appears to have been derelict, for his duty was to record it and deliver it over to the clerk of the County of Jefferson, whenever he should be appointed, whose duty in turn was also to record it and forever keep it on file in his office. Diligent search has failed to bring to light the record in either place. The report which so much precaution was taken to preserve seems to be irretrievably lost.

The commissioners were to receive as compensation "the sum of $3.00 per day to be paid out of the first moneys to come into the treasury of the county." On June 27th, it was ordered by the board of county commissioners then in session that Roger N. Cressup and Joshua Owen each be paid $21.00, and Samuel Hutton $24.00 "for locating the county seat of Jefferson County," from which it may properly be inferred that Cressup and Owen were engaged seven days and that Hutton was engaged eight days in this employment.

This page was created on 22 November 2015 and is copyrighted. This page may be copied and used for personal purposes but can not be republished nor used for commercial purposes without the author's written permission.
I am the County Coordinator and the Webmaster, the one who is responsible for the IAGenWeb project for Jefferson County, Iowa. Please contact me if you would like to contribute to this database or if you note any problems with these pages.