The following is a chapter from "The History of Jefferson County, Iowa - A Record of Settlement, Organization, Progress and Achievement", Volume 1, Pages 41-44, published by the S. J. Clarke Publishing Company of Chicago in 1912 (in 1914 according to some citations).
~~~oooOOOooo~~~
HISTORY OF
JEFFERSON COUNTY, IOWA
CHAPTER X
THE LAND SURVEY

The first settlers came to an open country where each as he arrived selected a place that pleased his fancy. If his tract adjoined the claim of another, it conformed to that. Beyond this there was no regularity of bounds and no certainty of acreage. There could be none until the lands were surveyed and points and lines established. No title could be acquired until this was done. In the meantime the settlers were but "squatters" whose rights of possession were acknowledged and protected under rules imposed and enforced by themselves.

A moment's reflection will suggest the importance of the governmental survey in permanent settlement and development. It underlies the ownership of land by fixing its exact location. Upon its divisions rests largely the machinery of local government.

On April 12, 1837, was run under governmental authority the first township line related to Jefferson County. It was number seventy-one north for range ten west and lies between the present Township of Liberty and the County of Van Buren. It was established by Hervey Parke, a deputy surveyor, under a contracted dated October 1, 1836, covering the states of Ohio and Indiana and the Territory of Michigan, which then included Iowa. More than six years were to pass before the township survey of the county was completed. The last township line run was number seventy-four north for range eleven west. It separates the present Township of Polk from Keokuk County. It was established on June 25, 1843, by Alvin Burt, a deputy surveyor, under a contract dated May 8th in the same year.

In 1837 four townships of the county were defined. They were then in Henry County. The surveyor was Hervey Parke. It was the rule to run and to mark a line in one day. The first township to have its boundaries determined was number seventy-one north, range eight west. This is Round Prairie. On April 20th its eastern line was established; on April 21st, its southern line; On April 23rd, its western line; on May 2d, its northern line. Townships number seventy-one north, range nine west, and numbers seventy-two and seventy-three north, range eight west, followed in quick succession. On May 14th, line number seventy-four north for range eight west was run completing this survey. These townships are respectively Cedar, Lockridge and Walnut. They were in the Blackhawk Purchase, and between them and the Indian Boundary remained only fractional townships.

In December, 1840, five additional townships were defined. The surveyor was Uriah Biggs. These were number seventy-one north, range ten west, and numbers seventy-two and seventy-three north, ranges nine and ten west. These were in part from the Blackhawk Purchase and in part from the Second Purchase. They are respectively Liberty, Buchanan, Center including Fairfield, Penn and Blackhawk.

In June, 1843, the remaining townships were defined. The surveyor was Alvin Burt. These were numbers seventy-one, seventy-two and seventy-three north, range eleven west. A little more than half their lands came from the Second Purchase, the remainder from the New Purchase. These townships are respectively Des Moines, Locust Grove and Polk.

After the boundaries of a township are established, there is made a sectional survey. This divides it in thirty-six blocks each a mile square. These blocks are called sections and are regularly numbered, beginning with the one in the northeast corner, proceeding consecutively to the range line on the west, then back and forth alternately and ending with the one in the southeast corner.

A section contains 640 acres. It is divided into halves of 320 acres by a north and south line, and into quarters of 160 acres by an east and west line. A quarter section is subdivided by similar lines into halves and quarters. The Goverment's surveyor's (sic) ran only the section lines, but they marked on these the terminal points of the lines making the halves and quarters.

The sectional survey of the lands of Jefferson County began in the fall of 1837 in Township No. 71 north, range nine west. Townships Nos. 71, 72 and 73 north, range eight west, were next surveyed in the order named. The surveyor was E. F. Lucas, who accomplished the work in little more than three months.

These surveyors made ample field notes which present a succinct description of the country. The prairie and timber, the varieties of shrubs and trees, the character of the soil, cultivated fields, houses, trails, roads, streams, mill-seats, coal and stone, are all accurately noted. Distances are given in chains and links. Many abbreviations are used and to read their records easily these should be made familiar. The more important are sec. for section, qr. for quarter, cor. for corner, intd. for intersected, dia. for diameter, and var. for variation. The points of the compass are indicated by the letter N for north, S for south, E for east, and W for west. Initials of words which may be completed from the context are quite common, as W. for white, B. for black, R. for red, J. for jack, U. G. for undergrowth, and L. for links. These field notes are of sufficient interest and importance to be set out in full for the sales of these lands by the Government were based upon these surveys.

1. Each township line was surveyed on date as given.

3. The items or data given below, by books, refer to all the lines included in the respective books, as shown by the numbers on the township lines of the plat.

Book No. 15. Contract dated October 1, 1836, covering the states of Ohio and Indiana and Territory of Michigan (which then included what is now Iowa); book certified to June 14, 1837, by Hervey Parke, D. S., and signed also by M. B. Smith, title not given but probably one of the chainmen.

Book No. 16. Contract same as above, certified same date, and signed Hervey Parke, D. Surveyor, and by M. B. Smith.

Book No. 58. Contract same as No. 57; certified same date, and signed by same persons. 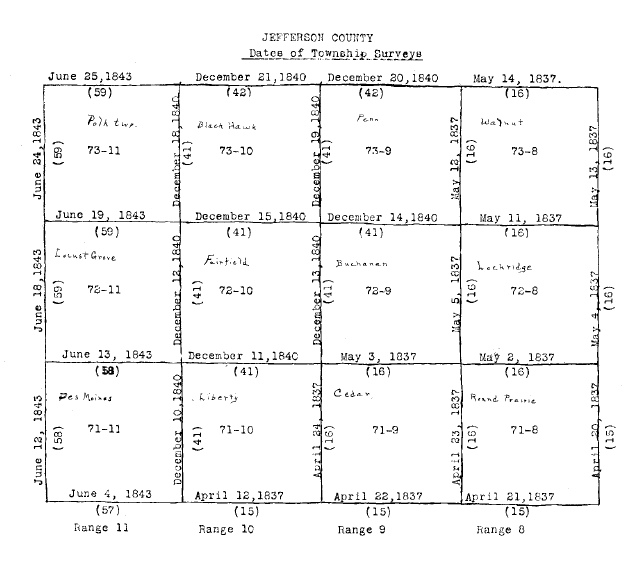 This page was created on 20 August 2015 and is copyrighted. This page may be copied and used for personal purposes but can not be republished nor used for commercial purposes without the author's written permission.
I am the County Coordinator and the Webmaster, the one who is responsible for the IAGenWeb project for Jefferson County, Iowa. Please contact me if you would like to contribute to this database or if you note any problems with these pages.