Funeral services will be held at 1:30 p.m., Saturday, December 10, 2011, at the Big Canoe Lutheran Church with Rev. David Andreae and Rev. Wayne Ellingson presiding. Burial will be in the church cemetery.

Virginia Louise Stoen was born on June 18, 1952, the daughter of Herbert and Kathryn (Bany) Stoen in Decorah, Iowa. Virginia was baptized July 13, 1952 and confirmed May 28, 1967 at the Big Canoe Lutheran Church. She graduated from North Winneshiek High School in 1971. She graduated from St. Teresa College in Winona, MN, with a degree to teach the severe profoundly handicapped. She worked in Marshalltown, IA, and also in Winterset, IA. She then went back to college at Drake University, where she received her Masters Degree as a Job Placement Specialist for people with disabilities. She worked in Mankato, MN, for the Mankato Rehabilitation Center, Inc. as a job placement specialist until her health forced her to quit in 1997. She lived in Mankato until 2001 and then moved to Charles City and then to Waterloo in Sept. 2002, where she lived at Harmony House. Ginger enjoyed living at the Harmony House where she received wonderful care and befriended many and became involved in the lives of the staff and residents. She also loved sharing scripture with the residents at Harmony House. Ginger loved her dogs and helping with the PAWS of Minnesota program. She enjoyed flowers, birds, playing her guitar, singing, cooking, sewing, and crocheting. Above all, Ginger enjoyed having pizza parties with her friends and treasured time spent with her family.

Ginger was preceded in death by her mother: Kathryn Stoen on Jan. 10, 2002. Her grandparents: William & Clara Bany and Henry & Martina Stoen. A special friend: John Aman in 2008. 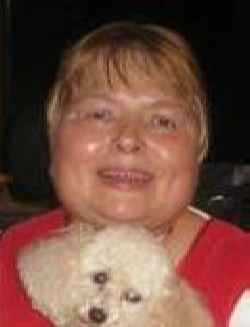