Laura Adelaide (Grindeland) Ness was born April 22, 1910, in Highlandville, Iowa, the daughter of Louis and Anna (Langeland) Grindeland. She was baptized into the Christian faith on May 15, 1910 at Big Canoe Lutheran Church, and was confirmed there on June 22, 1924. Laura attended country school and Decorah High School.

She was united in marriage to Harold A. Ness on August 26, 1931 at the Parsonage at St. Johns Lutheran Church in Locust, IA. This union was blessed with three daughters: Joanne, Lorraine and Kathryn (Katie).

Laura was a homemaker and a devoted partner to her husband, Harold, in their dairy and farming operation near Highlandville. They made their home on the Ness family farm until the time of Harold's death on Nov. 21, 1967. Laura then moved to Decorah and continued to be active at Big Canoe Lutheran Church and in her church circle. She was an accomplished quilter, and her hand-stitched quilts will continue to be enjoyed by her children and grandchildren for many years to come. She was an avid bridge player with her friends of many years and even played up to a few days prior to her death. Laura enjoyed many trips with family and special friends over the years. She looked forward to her weekly Friday visits from her niece, Genevieve Bentley. She was also a devoted mother, grandmother and great-grandmother. She will be missed by all who knew her.

She became a resident of the Barthell Eastern Star Nursing Home in Decorah November 1, 2005.

Laura was preceded in death by her parents; her husband, Harold, on November 21, 1967; her son-in-law, Dave Kelly, on March 31, 2000; a great-granddaughter, Brittney Weis, in infancy; her three sisters: Irene Bentley, Gertrude Brunsvold and Synneva Engan; and by her brother, Mervin Grindeland. 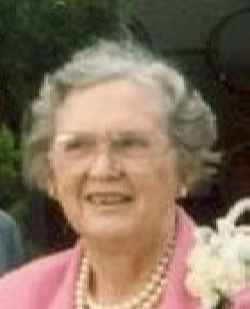