Funeral services are at 2:00 p.m., Sunday, April 29, at First Lutheran Church in Decorah, with the Rev. Chad Huebner officiating.

Visitation will be from 1:00 p.m. until the service begins. Burial is in the Locust Cemetery, rural Decorah, on Monday, April 30, at 10:00 a.m., with full military honors.

Chuck was born on May 23, 1930 in Virginia, Minnesota, and was the fifth of six children of Reverend William T. Hexom and Charlotte (Larson) Hexom. The family eventually moved to Pleasant Township of Winneshiek County, rural Decorah in Northeast Iowa, where Pastor Hexom served at Big Canoe Lutheran Church for many years. Chuck grew up in the parsonage of Big Canoe Lutheran Church, called Borgen (Castle on the Hill, in Norwegian).

Chuck attended a one-room schoolhouse during his early years and earned money starting the coal-burning stove each morning. He was proud to use those earnings to buy his first suit coat. He played the snare drum in the Decorah Kilties (Drum and Bugle Corps). Chuck graduated from Decorah High School in 1948 and continued to enjoy monthly lunches with his former schoolmates throughout his lifetime. After graduation, Chuck studied to be a telegrapher and worked for the Soo Line Railroad before serving in the U.S. Army, (KMAG -- Korean Military Advisory Group) from 1951 to 1953.

Arlys and Chuck were married in Big Canoe Lutheran Church by his father, the Rev. William T. Hexom, on May 21, 1953. They began married life in Waukesha, Wisconsin, where Chuck worked for the Soo Line while attending Carroll College and driving taxis. This schedule proved to be challenging for his wife and young family.

Over the years Chuck and Arlys enjoyed trips with their family within the U.S., celebrated their twenty-fifth anniversary with a trip to Norway, and visited their daughter and granddaughter in Spain.

Chuck retired from real estate in 1989 and the couple moved back to Decorah to be near their parents and relatives. Chucks next career quickly followed as he joined the Luther College staff as a security guard. He was well loved by all co-workers, faculty and students -- even those to whom hed given multiple parking tickets.

The couple lived at 312 Center Street which was the home Chuck purchased for his parents. There he enjoyed the fruits of Arlys gardening talents, watching birds and wildlife, going trout fishing and continuously washing and waxing his cars -- especially his fathers 1963 Dodge. The couple joined First Lutheran Church, where they were active and generous members. Chuck also volunteered for Meals-On-Wheels, one day saving the life of a lady when he delivered her lunch and found her on the floor. He also brightened the days of all the elderly recipients with his warm and friendly smile.

Chuck enjoyed the movie Its a Wonderful Life and said its title described his life well. We will miss him dearly but are comforted to know he is already enjoying an even more wonderful life with Jesus in heaven.

Memorials may be given to the Chaplaincy Fund at Aase Haugen Homes, Inc., 4 Ohio Street, Decorah, IA 52101. 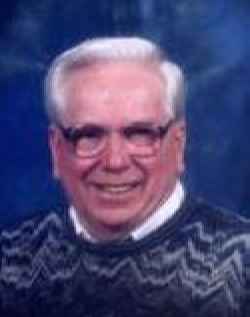