Funeral services will be held at 11:00 a.m., Wednesday, April 25, 2012, at the Decorah Lutheran Church, 309 Winnebago Street, Decorah, IA, with Rev. David Sorenson presiding. Burial will be in the Big Canoe Cemetery, Decorah, IA.

Friends may call after 10:00 a.m., at the church on Wednesday morning. The Schluter  Balik Funeral Home in Decorah is in charge of arrangements.

Gladys A. Grindeland was born on July 29, 1914, the daughter of Albert Colbin and Sophia (Knoff) Grindeland on the home farm in Highland Township, rural Decorah, IA. She attended the Highland Independent Country School, later taking bookkeeping courses. She worked at Barlows Goodyear Store and Tire Service in Decorah for twenty-two years. She then worked at Minnowa sales Company for ten years and then at Luther College for eight years at the switchboard, working the overnight shift. She retired in 1977, and continued to do seamstress work for many people in the area. Gladys was a wonderful Norwegian baker and was always busy knitting and crocheting. She was a member of the Decorah Lutheran Church, where she often volunteered, the Friendship Club and the WaTanYe Club.

Gladys was preceded in death by her parents: Albert Colbin and Sophia (Knoff) Grindeland. Three brothers: Harry (Ione) Grindeland in 1996, Arnold Grindeland in 1993; and Carl Grindeland in 1989. One sister: Stella (Herbert) Barlow in 1986. Two sisters in infancy: Henrietta and Gladys. One niece: Sharon Gipp Wesp in 2003. 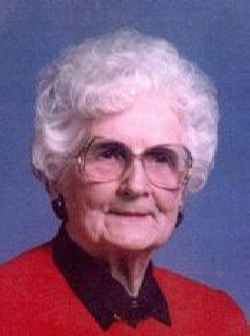