Funeral services will be held at 11:00 a.m., Friday, November 11, 2011, at the Big Canoe Lutheran Church, rural Decorah, IA, with Rev. David Andreae presiding. Burial will be in the church cemetery.

Edna Marion (Young) Gjere was born on February 12, 1919, the daughter of Philip and Clara (Barth) Young in Hesper Township, Winneshiek County, Iowa. She was married to Lloyd Gjere on September 16, 1938 at St. Johns Lutheran Church in Locust. To this union, four children were born: Lois, Donald, Dean and Curtis. Lloyd and Edna farmed in the Big Canoe area and Edna worked at Mansfield Industries in Spring Grove. They moved to Decorah in 1978 and Edna worked at Rubys Café. She enjoyed cooking, baking, fishing and spending time with her family. She always had a never ending cup of coffee and especially enjoyed her trips with her friend, Cheryl. 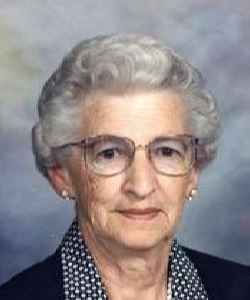