Funeral Services will be held at 11:00 A.M. Saturday, May 21, 2005 at Big Canoe Lutheran Church in rural Decorah by Rev. David H. Andreae with burial in the church cemetery.

Elsie Melinda Osmundson was born August 27, 1905 in Highland Township, Winneshiek County, Iowa, the daughter of Alvin and Caroline (Burmeister) Pfister. She was baptized and confirmed at St. Johns Lutheran Church at Locust by Rev. Seehus. Elsie graduated from Mabel High School in Mabel, MN. with the Class of 1924. She attended Iowa State Teachers College in Cedar Falls, IA for one year and then taught in country schools for six years.

Elsie was united in marriage with Sanford B. Osmundson on February 26, 1931 in the parsonage at St. Johns Lutheran Church at Locust.

Elsie and Sanford farmed in Pleasant Township, near Sattre, for twelve years. The couple then moved to Highland Township and farmed there until they retired and moved into Decorah in 1969. Sanford died on August 3, 1972.

Elsie was a member of Big Canoe Lutheran Church for many years, where she served as secretary of the church and was also a member of the church ladies aide and circle. Elsie loved to do crafts and made and stitched many quilts for herself and others. She was known for her afghans and doilies. In early retirement, she traveled to Europe, across southern Canada, the Bay of Fundy and all of the east coast. She also traveled to the western and southwestern United States.

Elsie became a resident of the Aase Haugen Home on August 8, 2002. She has always been in good health. At age 98, she had never been admitted to a hospital and did not need medication.

She was preceded in death by her parents; her husband Sanford; and three brothers, Walter, Lester and Norman Pfister. 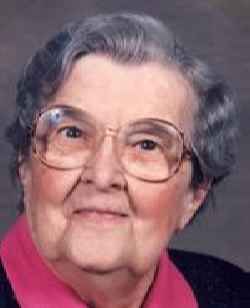